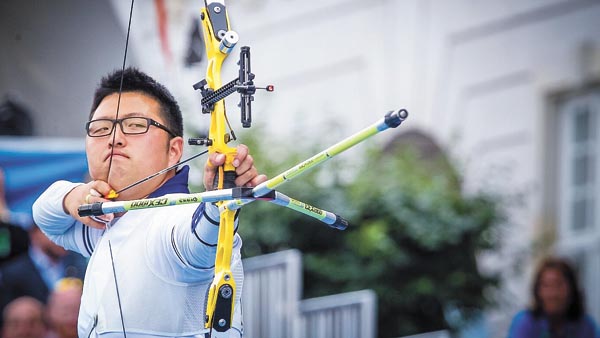 Kim Woo-jin competes in the 2015 World Archery Champion. After failing to qualify for the 2012 London Olympic Games, Kim is aiming to contend for the 2016 Summer Games in Rio de Janeiro. [WORLD ARCHERY]

Kim Woo-jin knows that getting a spot on the Korean national archery team can be more difficult than winning international events.

And like most athletes this year, the 23-year-old archer is aiming for the Summer Olympic Games in Rio de Janeiro. Though there are two trials left for Korean archers to qualify for the national team, Kim is regarded as the frontrunner for a spot.

After clinching silver medals in the men’s singles at the World Cup event last year, Kim went on to win gold in the World Archery Championships in July, both single and team. It was his second world title after 2011.

Having the momentum, he claimed the Aquece Rio International Archery Challenge, which doubled as a Rio 2016 Olympic test event, in September 2015. As a result, Kim became No.1 in world rankings in men’s recurve, edging his teammate Lee Seung-yun.

Kim, who is with the Cheongju City Hall archery team, said that he has a good feeling about his performance this year. The two-time Worlds champion is born in the year of monkey under the Chinese Zodiac, which happens to be the same as this year.

“I’m kind of thrilled since the Olympics is in the year of the monkey,” he said. “I have a feeling that things may go well. Going to the Olympics is a once-in-a-lifetime opportunity.”

The Rio Games will be his first Olympics. Kim first represented Korea when he was a senior at Chungbuk Physical Education High School in North Chungcheong. In 2010, he won two gold medals - men’s single and team - at the Asian Games in Guangzhou, China to signal his start.

In 2011, Kim also won two gold medals at World Cup events and everyone thought his spot at the London Summer Games in 2012 was secure.

“Back then, my shots hit the target in every event,” he said. “Many people thought my spot at the Olympics was guaranteed.”

But his early success didn’t help him. Kim admitted that people’s praise of his results made him lose focus and get lazy. His performance started to slip and he eventually finished fourth in qualification for the London Olympics, losing his spot on the national team.

“I was utterly shocked. I felt as if I fell straight to the bottom,” he said. “The failure continued to haunt me.”

It was a slump, according to Kim. At one point, Kim started to think it might end his career.

“Anxiety continued to distress me as I constantly missed the target. As a result, my records started to fall,” he said. “I changed my equipment, but it didn’t help.”

But he didn’t give up. Although he had to leave the Taereung National Training Center, he continued with his training at his club’s practice center.

Kim’s hard work began to bear fruit. In 2012 and 2013, Kim only competed in domestic tournaments to improve his condition. In 2014, he returned to competition on the international stage. In 2015, he successfully reclaimed his spot in the national team.

The four years since his failure to qualify for the London Games made Kim prudent and cautious. This was evident as he discussed the Rio Games.

“The reason behind my silence regarding the Olympics is because of my past experience in 2012. I have become more defensive since then,” he said. “I guess I was always a serious person though.”

But Kim said he won’t repeat the same mistake.

His goal to get to the Olympics is set for this year. But Kim wants to stay patient.

“I don’t think failing to enter the national team four years ago was entirely bad for me,” he said. “It was actually a good experience for me in preparing for the upcoming summer games.”

Though he was reluctant to talk about his goal at the Olympics, Kim finally admitted, not surprisingly, that he was aiming for the gold medal.

“To tell the truth, I imagine winning the gold medal at Rio before I go to sleep every night,” he said. “Some say image training helps one’s dream to become reality one day. If I’m qualified for the Olympics, I want to be remembered by the fans and the only way for me to achieve that is by grabbing gold.”