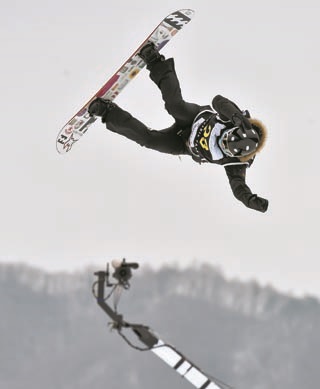 A snowboarder leaps in the air at Bokwang Snow Park, Pyeongchang, during a test event. The 2016 FIS Ski & Snowboard Cross World Cup that begins today is the latest test event in Pyeongchang in preparation for the 2018 Olympics. [KIM HYUN-DONG]

Woo Jin-yong never expected to be an Olympian, but he’ll likely leave Pyeongchang in 2018 as one of Korea’s first snowboard cross racers to compete at the sport’s highest level.

In ski and snowboard cross, four to six competitors race down a course that extends about 1 kilometer (0.6 miles). The courses are often narrow and include various terrain like banks, jumps, rollers and spines. Athletes can hit speeds as high as 80 kilometers per hour (50 miles per hour). Skiers and snowboarders often engage in physical tussles during the races and are thus prone to injury. The intense and physical event has gained tremendous popularity in the United States and Europe.

In preparation for the Winter Olympics in 2018, Pyeongchang has been hosting a number of winter sporting events to test the capabilities of its facilities. The latest is the 2016 FIS Ski & Snowboard Cross World Cup, held at Bokwang Snow Park, which begins today.

Woo and Lee Jung-hyun will be the only two Korean snowboarders participating in the men’s event. Woo is currently ranked 157th, while Lee is ranked 176th. 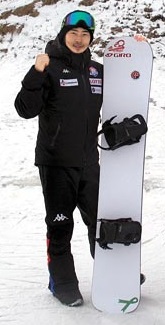 Woo Jin-yong poses for a photo with his snowboard. Woo will participate in the 2016 FIS Ski & Snowboard Cross World Cup that begins today at Bokwang Snow Park in Pyeongchang. [JOONGANG PHOTO]

The course at Bokwang Snow Park is about 1.2 kilometers in length and about 40 meters (43 yards) in width, with an average slope of 10 degrees. The venue is also the course where the same event will be held during the 2018 Pyeongchang Olympics. For this reason, as many as 150 men and women from 29 countries will make their way to the competition. Some of the notable competitors include top-ranking men’s snowboarders like world No. 1 Nikolay Olyunin of Russia and No. 2 Pierre Vaultier of France. Olyunin won silver in snowboard cross at the 2014 Sochi Olympics while Vaultier snatched gold.

Majoring in physical education while in college, Woo used to dream of becoming an ordinary PE teacher. But his life took a turn in 2007, when he went to Canada for language exchange after being discharged from the Marines and discovered snowboarding.

“I was never a professional athlete but I always loved doing physical activities,” said Woo. “I used to play soccer and practice judo. I think I was more into snowboarding than studying while I was in Canada.”

After earning his certification as snowboard instructor, he decided to refocus his life on becoming a professional snowboarder. When asked about how he came to his decision, Woo said, “I first saw snowboard cross competition on TV. It was an intense and dynamic race with competitors crashing into one another. As soon as I watched it, I was completely captivated and determined that I would compete in the event one day at the Olympics.”

“The Australia Continental Cup in 2010 was the first international competition I attended,” said Lee. “I went down hard and lost my helmet in the first round. Luckily, I finished the second round. I finished 22nd out of 30 racers for the competition.”

Woo has had more than his fair share of snowboarding injuries, with things like bruises and split lips becoming more the norm than the exception. He once broke his wrist during training, which required surgery and a pin screwed through the bone. Such frequent injuries make Woo nervous every time he stands on the starting line. But Woo thinks that’s something commonly shared among all the racers. That anxiety and anticipation adds much more excitement to the sport, and continues to lead Woo back to the starting line.

Professional snowboarders spend about seven months each year overseas for training and competitions, which costs more than 20 million won ($16,000) annually. But at first, Woo received from KSA only about 40 thousand won per day, or roughly 14 million won per year. Since snowboard cross was not an event held in domestic competitions, there were no semi-pro teams or sponsors to support Woo. He had no choice but to ask for help from his parents. “I felt terrible asking for help,” said Lee. “So I started doing manual labor to support myself.”

With the Olympics approaching, the KSA bolstered its support for the event. Lee was added to the roster in 2012 and coach Sin Myeong-soo, who serves as the equipment technician for the team, came along to assist the two snowboarders. The team was reinforced when Marko Mihic from Slovenia joined the crew in October 2015. Now that the team has been assembled, Woo is just biding his time until the competition.

Around 40 to 50 snowboarders will compete in the Olympics. With four person limit depending on nationality, Woo will likely participate in the Olympics if he continues to do well until 2018. “My aim for the competition from today to Feb. 28 is to make it into the top 32,” said Woo. “I will ride in the course at Bokwang Snow Park again two years from now.”