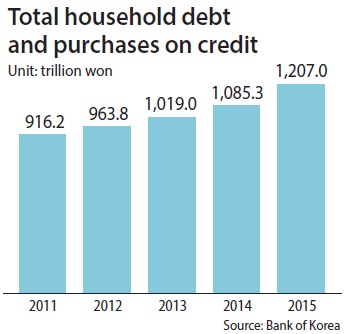 Household debt has once again reached new heights despite deepening concerns of the effects excessive leverage could have on the economy.

According to the Bank of Korea on Wednesday, household debt including purchases on credit reached 1,207 trillion won ($977 billion) by the end of last year. That’s 41.1 trillion won or 3.5 percent more than the last record set in the third quarter.

But more importantly, 121.7 trillion won of new household debt was added in just one year, which is the largest amount created in a single year.

The last record was set in 2011, when household debt grew 73 trillion won on-year

Even by growth rate, that’s the fastest since 2006 when the Korean economy was up because of the hot property market. Last year, household debt and credit card purchases expanded 11.2 percent on-year, while in 2006 they rose 11.8 percent.

Last year’s expansion partly due to the property market, which has remained stiff since the global crisis of late 2008 but loosened recently thanks to eased government regulations.

The government has loosened regulations including debt-to-income and loan-to-value ratio bars, and also lowered the key interest rate between the second half of 2014 and the second half of 2015 to all-time low of 1.5 percent. It was believed that one of the reasons the government eased regulations on debt was to lift the domestic economy by encouraging people to spend because exports, a crucial contributor to growth since 2008, have been struggling since early 2015.

The announcement that the government starting this year will again tighten its grip on household debt by making it harder to take out loans is also suspected to have contributed to the growth at the end of last year.

In fact, household debt including mortgages grew 3.57 percent in the last three months of the year compared to the previous quarter, which is faster than the 2.8 percent on-quarter growth recorded in the third.

Starting this month, banks have raised their standards for loan requests, and this is expected to slow the expansion of household debt.

Though the debt levels are not an immediate threat, the Ministry of Strategy and Finance on Wednesday said it will undertake structural reforms and improve the employment situation to help household income grow while lowering debt.