Baeksa Village, located in Junggye-dong, Nowon District, is the last shanty town of Seoul. The surrounding areas have mostly undergone redevelopment, but this village has remained unchanged. Currently, most of the houses, which are built practically on top of each other, are empty. [KIM CHUN-SIK]

Architects these days are paying more attention to alleyways. Yoo Hyun-joon, a professor of architecture at Hongik University, recalls his childhood memories of alleyways in his book “What the City Lives With.”

“I can still vividly remember my grandmother and maid working together, sitting in an alleyway when the sunlight was warm,” he wrote. “The alleyway was the common living room of the town where people could mingle with each other.”

Likewise, Seung Hyo-sang, the CEO of the construction company Iroje, says, “What’s old has its own beauty.”

He has been experimenting with creating new architecture in Baeksa Village in northern Seoul, while maintaining the alleys and geographical features of the area in what is called the “Baeksa Village Project.” The village is the last remaining shanty towns in Seoul, nestled on a hillside in Junggye-dong, Nowon District, and is slated for redevelopment.

Earlier this month, the JoongAng Ilbo met with Seung at his office to learn about sustainable architecture and what a happy city is.

Q. The drama “Reply 1988” was a big hit recently. On the show, people - even the younger people who grew up in apartments - immersed themselves in the village community in the alleyways. Where do you think such enthusiasm came from?

A. My parents were from North Korea but fled to Busan during the Korean War. This is why I grew up in Busan. In my hometown, there were eight households that shared a yard, which had a common bathroom and well.

It was crowded every morning because people wanted to use them at the same time. At lunch time, the village became very calm. It became lively again when each household was preparing for dinner time. The yard was shared by the townspeople. We became one family, and I am still in contact with one of the families. That memory became my foundation for architecture.

There was a time when I was searching for my own architectural style after architect Kim Swoo-geun, who taught me about architecture, passed away.

Passing by a shanty town in Geumho-dong, Seongdong District [in eastern Seoul], I could recall my childhood. All of a sudden, the place seemed splendid. The feeling I got in that place became my foundation for architecture.

People perceive their houses as a space, so they have a “homing instinct.” However, children nowadays perceive their houses with numbers as they grew up in apartments, a type of building that all look alike. In this way, they are losing the ability to go back home. We have to look closely to how children react when they are in trouble or danger. We can make changes to apartments to create a sense of community that residents can share.


You have been emphasizing the value of shanty towns and alleyways and the “Baeksa Village Project” is your representative work. How will you continue to develop it?

Traditional redevelopment projects modify the original landscape. However, Unesco suggests the following four principles for the conservation of historical villages: First, conserve the land; second, conserve the streets; third, conserve the topography of the site; and fourth, maintain the inhabitants’ rules and community. 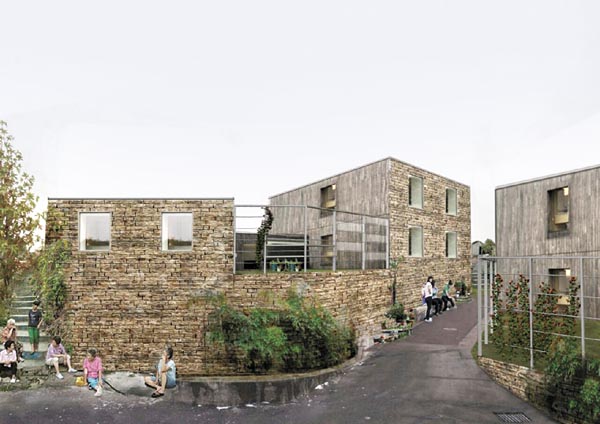 However, Korea didn’t take any of these principles into account. In Korea, civil engineering, architecture, interior design, landscaping and signboards are done independently, meaning that there is no one who takes care of the whole process with consistency. In Western countries, architects take that role and they design the landscape first, the biggest part of the redevelopment. The “Baeksa Village Project” abides by the four principles provided by Unesco - it does not artificially adjust the topography.

The Baeksa Village has been excluded from redevelopment because it is remote, and it has become the last shanty town in Seoul. People who were moved out of the Cheonggye Stream area and Wangsimni in the 1960s ended up residing in this village. A thousands households lived in an area of 200,000 square meters [49 acres] in size. They could not afford to use heavy machinery for construction so their houses were shabby, yet they respected the original topography of the land.

Originally, Seoul City was planning to redevelop the village into high-rise apartments. However, during last years of Oh Se-hoon’s tenure - the previous Seoul city mayor - the plan was changed to not use traditional strategies for redevelopment. It was decided that 354 households would be built in a new way of redevelopment, so that the topography, land, streets and ways of living would not be modified. 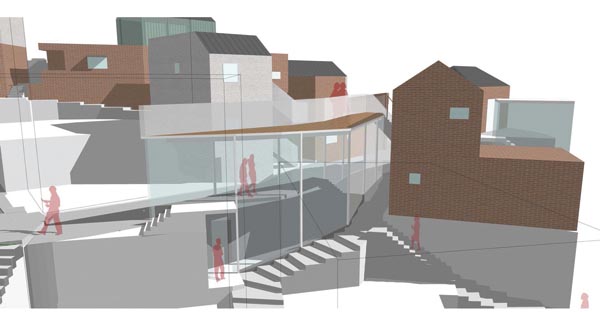 The original residents left the renovated area because of increased maintenance costs. In order to decrease costs, the size of the living space has to be minimized. Not all houses need kitchens and bathrooms; also, the ratio of single households is rising. This means there is a growing need for communities for people. If there are more facilities that people can use together, a sense of community will be revived.

Three foreign architects have participated in this project. One of them is Dominique Perrault, a French architect famous for his works such as ECC building at Ewha Womans University and the National Library of France. Actually, it would require a lot more money to have Perrault on the project, but he participated in the sense of being a part of a cultural movement. He said, “It is so surprising,” after he saw Baeksa Village. Co-participant Florian Beigel, a London-based architect also said, “It doesn’t need more modifications. I cannot make something more beautiful than the original town.” Korean architects try to make huge changes to the village, but they don’t need to.

Buildings in the redeveloped Baeksa Village will be higher - to have two to three stories - because the floor area capacity should be increased without making changes to the shape of the streets. Buildings can be modified while the land size is constant. The original streets are not subject to change as well. Newly built buildings for this project will be very changeable.

Do you think the village can handle the expense of redevelopment even without building high-rise buildings?

There is a way in which development gains can be secured without building high rises: satisfying expected floor area capacity. Korea’s regulations for architecture are wrong because they only designate three types of housing, which are apartments, multiplex houses and detached houses. In Korea, apartments can be sold whenever they are built, so the developers do not consider any elements of a living place.

Chinese developers invite architects during the process in order for their apartments to sell well. I often visit China and feel that Chinese apartments are better than ours.

Korean apartments are one of the most poorly built compared to the world standard. Let’s say it was because of price limitations in the past, which is understandable. However, the limitations are gone nowadays. Meanwhile, developers haven’t improved the apartment structures but only changed the interior design materials. I have experience designing apartments in China but not in Korea.

The land in Korea often slopes. This can be beneficial because you can build terrace-like architecture by using the natural slope. Baeksa Village is totally new in its style of architecture, compared to other areas of a similar size. The process is a bit delayed currently. But I believe that everyone will follow in the footsteps of the project if it succeeds.

People’s lives change if the environment changes. Therefore, we always think that we don’t change all at once. Instead, we make small improvements if something is wrong. In the West, there are increasing examples of “urban acupuncture,” which means making small changes that are needed rather than changing the whole thing. If we tackle a specific spot, the surroundings also change as well, just like how acupuncture heals one’s body.

Medellin, Colombia, was a city notorious for illegal drug trafficking. There was an extreme gap between the rich and poor and the crime rate was very high. Living conditions were extremely bad. With these incorrigible conditions, a mayor who was previously an architect used this solution - urban acupuncture. He placed facilities like libraries in the shanty towns and made improvements in transportation. At last, residents themselves were changed. Crime rates decreased and the overall atmosphere became more vibrant.

Seoul is a city of mountains. This means that redeveloping an entire area all at once is not good for this city, unlike Las Vegas, which was built on flat land. The government should set its sights on finding happiness for its citizens; it has been pursuing economic development up until now, but it’s uncertain we have become happier than in the past.

In 2000, to celebrate the new millennium, the Korean government prepared a fireworks show at Panmunjeom. Look at what the French government prepared for the same event, in contrast: It planned a project where intellects debated on what happiness is for 365 days through the state-owned broadcasting company. Comparing these two contrasting events, I felt ashamed. Money doesn’t solve everything and this is why people cherish the past. Also, the world is experiencing low economic growth. Now is time to think about how we can be happier, not how we can be richer.

Young Korean people these days are interested in alleyways, such as in Yeonnam-dong, Hongdae, Sangsu-dong and Kyungridan-gil. Meanwhile, capital has been flowing to such places as they get popular, bringing in franchises. What can be done about this phenomenon?

Rising land prices disrupt the streets; it causes gentrification, leaving the original residents with nowhere to go. Park Chung Hee in the past redeveloped Suseong-dong by covering up Suseongdong Valley and building apartments. People in the past would not have known the value of land, but I think the act of privatizing the land is the same as pariah capitalism.

The Seun Arcade in Jongno District, a large shopping district that was popular in the 1970s, is going to be rebuilt soon. As Seoul’s official architect in charge of the project, how will you carry it out?

Architect Kim Swoo-geun drew a rough sketch for the Seun Arcade. It was quite unconventional as it was a combination of residential and commercial areas in which a shopper can push stroller while walking along the deck. Even the architects from developed countries back then could not have designed such a “super structure” - ironically, the unprecedented planning was born in one of the poorest countries in the world. However, Kim Hyun-ok, who was a stubborn mayor, pushed ahead with the plan even though the planning wasn’t completed.

The streets of Seoul stretch from east to west except for Toegye Road. If the deck of Seun Arcade can connect Jongno District and Mount Namsan, it will naturally connect Jongno, Toegye-ro and Cheonggye-ro. This means the total redevelopment of areas nearby the arcade. If the city purchases a part of the arcade and relocates the architecture division of the University of Seoul, it will considerably change the surrounding environment.

We can change society through architecture. Just as Adolf Loos, who said ornament is a crime, could bring about a new phase in modern culture, architecture changes the era, it doesn’t follow the era.