13 companies accused of collusion on bids

13 companies accused of collusion on bids 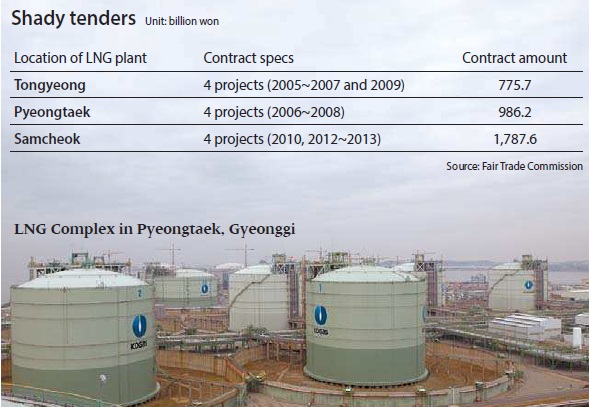 Nearly a year after 28 companies were heavily fined for fixing bids on a railroad project, 13 major construction companies have been caught doing the same for 12 liquefied natural gas (LNG) production plant projects worth 3.55 trillion won ($2.88 billion).

According to the Fair Trade Commission (FTC) on Wednesday, 13 companies, including Daelim, Doosan Heavy Industries and Hyundai Engineering & Construction, fixed bids in 12 projects to build LNG storage tanks in Tongyeong, South Gyeongsang; Pyeongtaek, Gyeonggi; and Samcheok, Gangwon, from 2005 to 2013. They decided the successful bidder in advance prior to each tender, while other companies made bids they knew they would lose.

The FTC said the first fake tender process was for a Tongyeong project in August 2005, which GS Engineering & Construction won for 153.9 billion won.

“The 13 companies are the only businesses in the country that can run LNG storage tank building projects,” said Seo Myung-sook, material purchasing manager at the Korea Gas Corporation. “The possibility is high that companies make such attempts to cheat in the government-controlled energy business, since few companies can participate as the projects demand a high level of technology.”

The total amount of contracts fixed since 2005 is about 3.5495 trillion won, which is similar to the Honam railroad building project in 2014 worth 3.598 trillion. Some 28 companies were caught fixing bids. The FTC imposed a 435.5 billion won fine in total, the biggest ever for construction companies. A similar fine is possible against the 13 companies in the new case.

The 28 companies caught in the Honam case were punished administratively and prohibited from participating in tenders by the government. But the prohibition was lifted by a Liberation Day pardon on Aug. 15, 2015. The companies promised to clean up their act and carry out social contribution activities through a foundation set up with about 200 billion won.

“We have been making bids since the punishment and are trying to run the business fairly,” said a spokesman for a construction company under suspicion in the current case. “All of those projects audited by the FTC were already completed, and the bidding was carried out years ago.”

“I am sorry that companies came under fire for bid-fixing again, but those projects were completed,” said a spokesman for the Construction Association of Korea. “Most of the companies are trying to run their businesses fairly since the Honam project.”