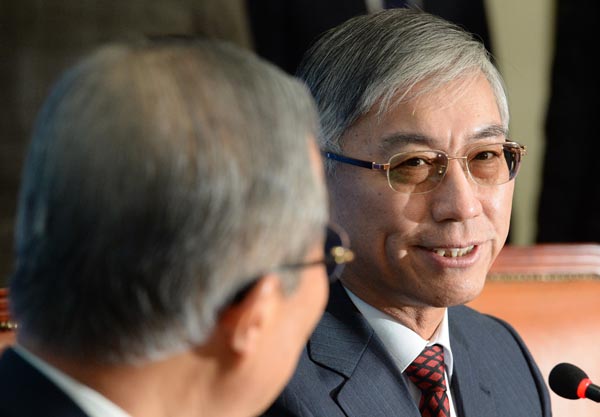 Chinese Ambassador to Seoul Qiu Guohong, right, expresses strong opposition to the deployment of the Thaad battery in Korea in a meeting with Kim Chong-in, left, interim leader of the opposition Minjoo Party at the National Assembly on Tuesday. [NEWSIS]

The Blue House on Wednesday shot down the Chinese ambassador’s criticism of the deployment of the Terminal High Altitude Area Defense (Thaad) system on the Korean Peninsula, insisting the decision was based on Seoul’s security and national interests.

“The issue of the deployment of the Thaad by the U.S. Forces Korea is a measure related to our self-defense in response to North Korea’s increasing nuclear and missile threat and a situation to be decided upon in accordance to our security and national interest,” Blue House spokesman Jeong Yeon-guk said in a briefing. “The Chinese need to recognize this.”

On Tuesday, Chinese Ambassador Qiu Guohong expressed strong opposition to the deployment of the American anti-ballistic missile defense system in a meeting with Kim Chong-in, interim leader of the opposition Minjoo Party at the National Assembly.

Beijing’s envoy said in a rare public statement on the issue that the placement of the Thaad battery can could pose a security issue for China and “instantaneously” sour bilateral relations, which would take a long time to recover.

He added that if the Thaad deployment had not been an issue, a new United Nations Security Council resolution on North Korea’s fourth nuclear test would already have been passed, an indication that Beijing is playing one issue off the other in negotiations with the United States.

Washington and Seoul said they will launch talks on the placement of the Thaad battery in Korea soon. The two sides agreed to officially launch negotiations immediately after North Korea’s Feb. 7 long-range missile test, but the start of the talks on Tuesday was delayed for unspecified purposes.

Beijing has been consistently wary of the battery’s placement in South Korea and has reacted especially sensitively toward the AN/TPY-2, a high-resolution, rapidly deployable X-Band radar designed to detect, track and identify ballistic missile threats at long distances and high altitudes.

The mobile X-Band radar can scan the horizon for hostile missiles up to a maximum of 2,000 kilometers.

The South Korean Ministry of Foreign Affairs said in a statement Wednesday that “it is reasonable to examine the root of the problem” when raising the issue of the deployment of the Thaad.

The ministry also said, “The U.S. Forces Korea deployment of the Thaad is a separate issue from that of the passing of a UN Security Council sanctions resolution.”

Deputy Minister for Political Affairs Kim Hong-kyun summoned Ambassador Qiu to the Ministry of Foreign Affairs Wednesday to explain the reports. The ministry said he provided “a sincere explanation” regarding his talks with the Minjoo Party leadership Tuesday. Qiu conveyed he “understood the sensitivity of this situation.”