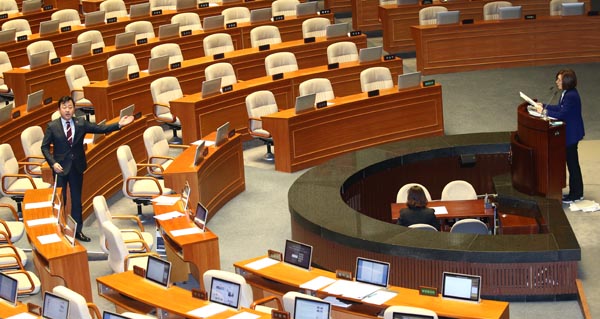 Minjoo Party Rep. Eun Soo-mi, right, speaks in the main conference hall of the National Assembly on Wednesday as part of the filibuster led by the opposition. She set a new record for the longest filibuster given in a plenary session, at 10 hours and 18 minutes. She spoke from 2:30 a.m. to 12:48 p.m. Wednesday. [KIM KYUNG-BIN]

Opposition lawmakers continued Wednesday their filibuster to stop the passage of a contentious counterterrorism bill, paralyzing the legislature throughout the day.

The National Assembly opened its main session Tuesday evening, when Speaker Chung Ui-hwa introduced the counterterrorism bill, sponsored by the ruling Saenuri Party, to the floor for a vote. Shortly after the bill was presented, however, the main opposition Minjoo Party began an organized filibuster attempt.

Minjoo Rep. Kim Kwang-jin, who spoke for five hours and 35 minutes, was the first to speak, after which other opposition lawmakers joined the relay debate. People’s Party Rep. Moon Byung-ho took a turn as the second speaker, talking for one hour and 49 minutes.

Rep. Park Won-suk, a member of the Justice Party, took over the podium as the fourth speaker.

Until now, the record for the longest filibuster conducted at a plenary session belonged to Kim Dae-jung, who would later go on to become president. He appealed to representatives for five hours and 19 minutes on April 20, 1964, to stop a motion to arrest fellow lawmaker Kim Joon-yeon.

When the Minjoo started its filibuster, lawmakers created a plan to continue the debate until midnight March 10, the final day of the session. They initially calculated that they would each need to speak for about five hours to kill the bill. But now, with support from members of the minor opposition People’s Party and Justice Party, they don’t even have to go that far.

The Saenuri Party called the opposition’s filibuster an act of terrorism against public safety.

“The Minjoo Party is trying to disarm national security,” said Rep. Won Yoo-chul, the Saenuri floor leader, at a meeting of party leaders. “We cannot hide our shock and rage.”

However, Saenuri Chairman Kim Moo-sung said he felt certain the opposition would put a stop to its filibuster on Friday in order to vote on the new electoral map.

On Tuesday morning, the ruling and opposition parties finally struck a deal on a long-overdue electoral map for the April 13 legislative election and agreed to pass it on Friday.

“Both the ruling and opposition parties need it,” Kim said. “I believe the filibuster can be stopped and a vote can take place.”

“We are not rejecting the entire bill. We are just rejecting the clauses that would violate the people’s basic rights,” Lee continued, adding that the party was willing to negotiate on the antiterrorism bill and end its filibuster.

Since the Sept. 11, 2001, terrorist attacks on the United States, the ruling and opposition parties and the government have repeatedly attempted to create a counterterrorism law.

However, no vote has ever taken place due to concerns from lawmakers that it would yield too much authority to the National Intelligence Service (NIS), which time and again has involved itself in domestic politics.

The administration and the ruling party recently renewed their push, citing escalated threats from North Korea, but liberal opposition parties repeatedly rejected the plan. The latest bill, proposed by the Saenuri Party, seeks to establish a counterterrorism center inside the Prime Minister’s Office and give the NIS the mandate to collect information.

The most contentious point enables the NIS to eavesdrop on and wiretap. While the Minjoo Party fears the NIS would abuse that power to carry out domestic surveillance, the Saenuri has argued that the bill includes strong safeguards to prevent such abuse.

“The opposition has said that the NIS would be able to indiscriminately wiretap and eavesdrop on private conversations, but the targets are only people considered security threats,” said Rep. Cho Won-jin, the deputy floor leader of the Saenuri Party, adding that a warrant from the High Court to surveil Koreans and an approval from the president to spy on foreigners are required legal basis.

Following a series of embarrassing melees in the legislature, the ruling and opposition parties in 2012 amended the National Assembly Act, which engineers the need for compromise into the parliamentary process. The revision was sponsored by the Saenuri, when President Park Geun-hye was serving as its interim chairwoman.

During negotiations over the revision, the Saenuri Party concentrated its efforts on creating a system that would allow the passage of a budget bill before the statutory deadline and punish violence inside the legislature.

The opposition party insisted on curtailing the scope of the National Assembly speaker’s power to bypass standing committees and introduce a bill directly to a voting session.

The opposition also demanded the reinstatement of the filibuster system.

Article 106-2 of the National Assembly Act, which governs the implementation of unlimited debate, gives a lawmaker the right to start a filibuster, an item referred to the plenary session without any time limit, if he or she submits to the speaker a letter of request signed by at least one-third of all sitting National Assembly members.

The Minjoo Party currently occupies 108 seats in the 300-seat legislature, which currently has 293 sitting lawmakers. Ending the debate will require a consensus of three-fifths of lawmakers.

The Saenuri currently has 157 members, which is not enough to end the filibuster by itself.