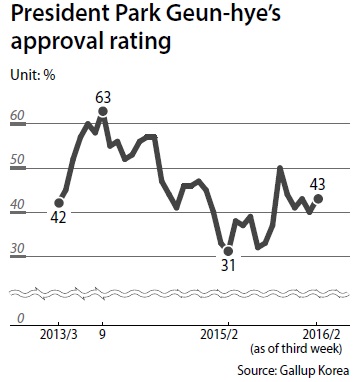 During her three years in office, President Park Geun-hye has faced a series of challenges domestically and abroad, continuously resorting to extreme political measures to resolve them.

And, in fact, her approval rating tends to rise when she makes uncompromising decisions, an analysis of her presidency so far showed.

“The public supports a leader’s decisiveness,” said Park Won-ho, a political science professor at Seoul National University. “It’s regretful that she isn’t making the decisions on her own initiatives. Her decisions have been reactions to crises.”

Park starts her fourth year in office today, but the first test she faced as stateswoman was a series of escalated threats by North Korea shortly after she was elected president.

After conducting its third nuclear test on Feb. 12, 2013, Pyongyang pulled all of its workers out of the Kaesong Industrial Complex, the last remaining inter-Korean economic project.

After her proposal for talks was rebuffed, Park ordered on April 26, 2013 all South Korean workers to leave the venture park, which effectively suspended operations at the complex.

“We must end this vicious cycle of giving something in return for the North’s brinkmanship,” Park said at the time in regard to the decision.

Later in her term, on Aug. 4, 2015, the North staged another provocation, planting landmines in the demilitarized zone (DMZ) that ended up maiming two South Korean soldiers on patrol. In response, Park ordered that propaganda broadcasts along the border to be resumed. Her next definitive decision came earlier this month, when North Korea fired a long-range missile on Feb. 7, following its fourth nuclear test in January.

That proved to be enough for the president, who just days later pulled the plug on the Kaesong Industrial Complex. She also ordered the Ministry of National Defense to begin discussions with the United States on the deployment of the Terminal High Altitude Area Defense (Thaad) anti-ballistic missile system, despite China’s strong opposition to it.

But Park has also maintained an extremely tough stance toward Japan.

Over the course of her presidency, she declared that there would be no hope for an improvement in bilateral ties between Seoul and Tokyo unless Japan faced up to its wartime past and make peace with its victims, specifically Korea’s aging group of former “comfort women.”

While the agreement was criticized by the public for being unsatisfactory, Park emphasized that the government had done everything it could to achieve the best possible outcome. The president has also shown to handle domestic affairs uncompromisingly.

Since early last year, Park has pushed forward with the overhaul of the debt-stricken pension system for the public servants.

In an attempt to approve the reform plan, the ruling Saenuri Party made a political trade with the opposition, accepting its demand that the National Assembly have the authority to revise regulations created by the administration, including presidential decrees.

Park vetoed the bill on June 25, condemning the National Assembly for attempting to strong-arm the government. She also attacked Rep. Yoo Seong-min, the floor leader of the ruling party at the time, for his “politics of betrayal.”

Such harsh criticism from the president to her ally is rare, and the dispute resulted in Yoo stepping down from his position. Even when the government faced condemnation over its series of botched rescue attempts following the sinking of the Sewol ferry on April 16, 2014, Park took to extreme political measures. On May 19, 2014, she declared that the Korea Coast Guard would be dismantled in lights of its failures - an unprecedentedly harsh punishment for a state agency.