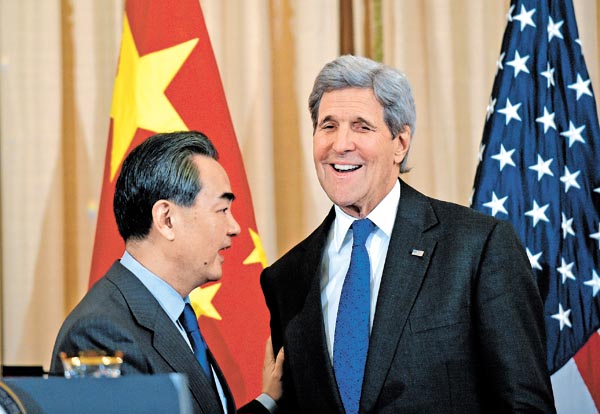 U.S. Secretary of State John Kerry and Chinese Foreign Minister Wang Yi said they have made “significant progress” on a United Nations Security Council resolution on North Korea that will “go beyond” anything passed before.

Kerry and Wang held talks in Washington on Tuesday over a Security Council resolution to impose tougher sanctions on Pyongyang for its fourth nuclear test on Jan. 6 and a subsequent long-range missile launch on Feb. 7.

In a joint press conference with Kerry afterward, the Chinese foreign minister made clear that “important progress” has been made, and the two sides confirmed that they do not recognize North Korea as a nuclear weapons state.

“We are looking at the possibility of reaching agreement on the draft resolution and passing it in the near future,” Wang said, adding that after a consensus is reached, “we can effectively limit further progress of the DPRK’s [Democratic People’s Republic of Korea’s] nuclear missile program.”

Wang emphasized that “both sides do not accept the DPRK’s nuclear and missile program,” implying Beijing will cooperate on Security Council sanctions on North Korea.

Kerry said, “There is no question that if the resolution is approved, it will go beyond anything that we have previously passed.”

He said that a Security Council resolution in 2013 stated that if Pyongyang violated the resolution or engaged in a missile launch, China would take significant steps. “I believe that what we are considering is significant,” Kerry said.

Kerry said the two nations’ shared goal is “not to be in a series of cycling, repetitive punishments.”

But Wang pointed out that a UN Security Council resolution would not provide “a fundamental solution” to the North Korean nuclear issue and touted his new approach of pursuing denuclearization of the Korean Peninsula parallel to a peace treaty to replace the armistice agreement that ended the 1950-53 Korean War.

“We know certain parties have different views on this proposal,” he added. He urged a return to the long-stalled six-party talks, which involve China, Japan, Russia, the United States and the two Koreas, and which are supposed to convince Pyongyang to abandon its nuclear ambitions. The talks have been suspended since late 2008.

Despite Wang’s offer of talks toward a peace pact in tandem with denuclearization efforts, Kerry adhered to the stance that Pyongyang “can actually ultimately have a peace agreement with the United States of America… if it will come to the table and negotiate the denuclearization.”

After the latest negotiations between the top envoys of the United States and China, Seoul officials are optimistic that “significant progress” can lead to stronger and more effective sanctions on Pyongyang.

A South Korean Foreign Ministry official said Wednesday regarding progress on the resolution, “It is definite that stronger content [in the resolution] will come out of this. Minister Wang also said ‘in the near future.’ We are aiming for the resolution to be adopted by the end of this month, so it is true we are in the final stage.”

The new resolution is expected to be tougher than Resolution 2094, which was passed unanimously by the council on March 7, 2013, after North Korea’s third nuclear test on Feb. 12 that year, according to diplomatic sources. That resolution, the fifth imposed on Pyongyang since 2006 for its nuclear and ballistic missile tests, called for a freeze or blocking of financial transactions and monetary transfers if such activities are determined to support North Korea’s nuclear and ballistic missile programs. The resolution tightened financial sanctions by making some pre-existing measures mandatory and aimed to block bulk cash transfers to the country. It also made mandatory inspection of all suspicious vessels and cargos.

Beijing has been concerned about deployment of the U.S.-led Terminal High Altitude Area Defense (Thaad) system in South Korea because of security concerns, but Kerry, during the press conference with Wang, downplayed the urgency of placement of a Thaad battery.

“We have made it very clear that we are not hungry or anxious to deploy Thaad,” Kerry said, after Seoul and Washington agreed to postpone the start of official talks on the missile defense system earlier that day. He emphasized that the Thaad system “doesn’t have offensive capability.”

Kerry added that the way to prevent deployment of a Thaad battery on the Korean Peninsula and decrease the number of American troops there is “by resolving the issue of the nuclear program in [North Korea].”