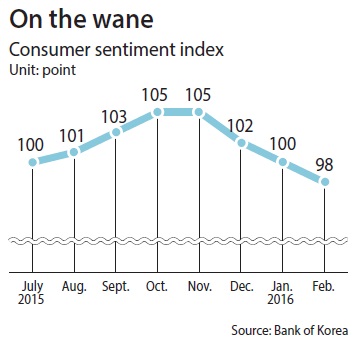 After a weak economic performance in February, the government and central bank came up with small measures that might help improve consumer sentiment and support small exporters on Thursday.

Consumer sentiment has slipped to the same level as when Middle East respiratory syndrome (MERS) struck the country last May. Externally, the country’s exports continue to decline.

According to the Bank of Korea, the composite consumer sentiment index dipped to 98 in February, down two points from the previous month. The index fell for the third consecutive month.

A reading below 100 means there are more people surveyed who are negative about economic recovery than those who are optimistic.

The last time sentiment was at the same level was last June when the MERS outbreak reached its peak, hammering the economy.

“As the drop in exports widens with the slowing Chinese economy and geopolitical risks sparked by North Korea are added to economic concerns, consumers’ perceptions about the economy have darkened,” a Bank of Korea official said.

Worsening consumer sentiment followed news of household debt hitting a record high on Wednesday. The nation’s total household debt, including credit card purchases and mortgages, stood at 1,207 trillion won ($1 trillion) at the end of last year, up 11.2 percent or nearly 122 trillion won from a year earlier.

It was the sharpest growth in debt since 2006.

A rapid rise in household debt can lead to households spending less.

The growth rate of household debt outstripped growth in household income, according to data by Statistics Korea.

Bank of Korea Gov. Lee Ju-yeol on Wednesday expressed worries about the economic recovery at a meeting.

“It has become clear that our economy cannot achieve sustainable growth without improving productivity through structural reforms,” Lee said. “It is a critical moment for Korea to carry out its reform plans.”

This year, the government has set a goal of increasing the country’s GDP by 3.1 percent by boosting the domestic market and restoring exports. The continuous declines in major economic indicators suggest the goal is too ambitious.

According to the Korea Customs Service, total exports plunged 17.3 percent from Feb. 1 to 20 compared to the same period last month. In January, exports plummeted 18.5 percent, the sharpest rate in six and a half years.

In response to the struggling economy, the Bank of Korea decided to expand its lending limit for commercial banks by 9 trillion won, to 25 trillion won, on Thursday in order to help them solve liquidity problems of small and midsize exporters and to get them to spend more on domestic production facilities. The extended limit will be valid until March 2017.

To encourage exports, the Bank of Korea also shaved off the borrowing interest rate for exporters from the current 0.75 percent to 0.5 percent.

“The extended limit will help small and midsize enterprises spend more and lighten the borrowing cost burden, which will eventually help the nation’s economic recovery,” said Kim Bong-ki, an official at the Bank of Korea’s monetary policy division.

The Bank of Korea’s lending limit nearly doubled from 12 trillion won as of February 2014 to 25 trillion won.

“The government has worked with private companies and financiers to prepare a so-called ‘Korea Package’ of strategies, which will help local companies grab business opportunities overseas and boost export deals under the AIIB,” Finance Minister Yoo Il-ho said at a ministerial meeting on the external economy held on Thursday.

The Ministry of Strategy and Finance will be in charge of exploring business opportunities in Eurasia and test the projects’ feasibility, while also expanding state-financing of new businesses in Vietnam and Russia.

It will consider a new assistance package for companies that want to explore markets in India.