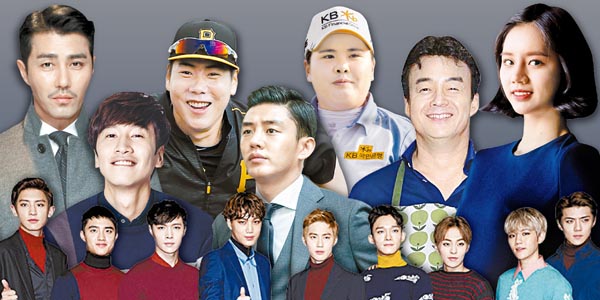 K-pop boy group Exo was once again chosen as the most powerful celebrity in Korea in 2015 by Forbes Korea after earning the title the previous year. Actor Yoo Ah-in came in second place, and singer-actress Hye-ri was third.

Since 2009, Forbes Korea has been publishing the “Korea Power Celebrity 40” list, which ranks stars who have shown the best performance throughout the year. The practice is based on the same standards Forbes uses in the United States to select its “Celebrity 100” each year, criteria which include sales, media exposure, TV appearances and how professional the celebrities are in their respective fields.

Exo scored high in terms of media exposure, and they were also active in appearing on TV shows. The K-pop act also showed excellence in terms of sales and professionalism. Last year, the nine-member group sold 1.8 million copies of their albums. 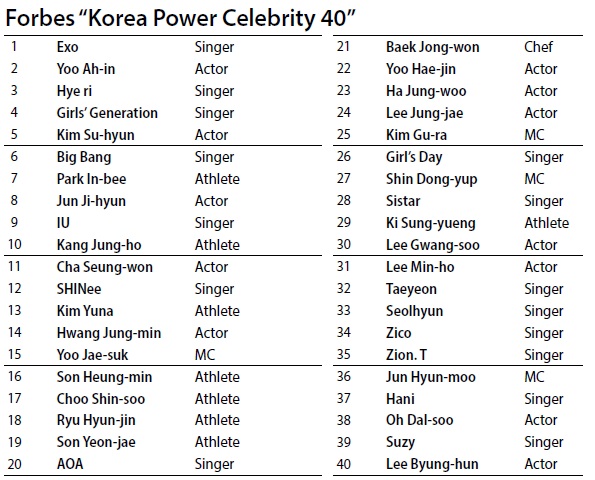 The second-ranked star, Yoo Ah-in, was recognized for his performance in two movies, “Veteran” and “The Throne,” last year. The two films managed to sell 18 million tickets in the box office. He also appeared in the SBS drama “Six Flying Dragons” and won a total of 12 awards at various year-end awards ceremonies. On top of that, he starred in six TV commercials last year, including ones for coffee, outdoor gear and telecommunication companies.

In third place, Hye-ri earned her fandom through the hit tvN drama “Reply 1988.” The show recorded a viewership rate as high as 18.8 percent, the highest ever for any cable TV program. Thanks to the show’s popularity, Hye-ri has become one of the most sought after celebrities among local companies for commercials. She appeared in eight last year and is scheduled to film more than 10 this year.

Many celebrities are new to the list while some shot up in the ranks, including many singers and entertainers who expanded their territories by taking on more cable TV roles.

Yoo Jae-suk, for example, who was in 21st place in 2014, climbed up to 15th place, while other popular MCs such as Kim Gu-ra made the list for the first time, at 25th place, and Jun Hyun-moo debuted in 36th place. Jun, known for his roles on JTBC’s “Hidden Singer” and “Non-Summit,” has been a regular face on about 20 different TV programs.

Comedian and MC Shin Dong-yeop made it back on the list in 27th place after being pushed out of last year’s list.

With cooking shows being one of the biggest entertainment trends in the country last year, a number of cooking stars were included on the list. Actor Cha Seung-won, who showed off his cooking skills on tvN’s reality show “Three Meals a Day,” landed in 11th place, while restaurateur and chef Baek Jong-won found himself in 21st place.

Star athletes like Kim Yuna (13th), Ryu Hyun-jin (18th) and Son Yeon-jae (19th) slid a bit in the ranks, but they still enjoy steady popularity. Girls’ Generation (fourth), Kim Yuna, Big Bang (sixth) and Yoo Jae-suk have been in the top 40 every year since the list was introduced eight years ago.