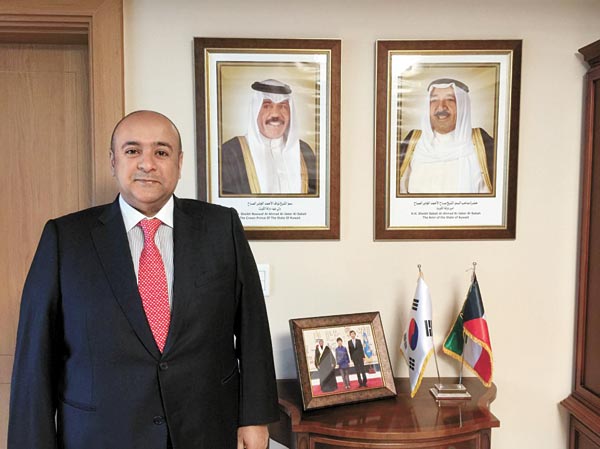 
February is a festive month for the people of the State of Kuwait as they celebrate the nation’s 55th National Day on Feb. 25 and the 25th Anniversary of Liberation Day on the following day, Feb. 26.

On this delightful occasion, I would like to extend my best regards and best wishes from the people and government of the State of Kuwait to the friendly people and government of the Republic of Korea. I am truly honored to have witnessed the major accomplishments our two proud nations - the State of Kuwait and the Republic of Korea - have made during the last 37 years since the establishment of our diplomatic ties in 1979.

A laser show in the skies of Kuwait City.

Even in the midst of global apprehension over plunging oil prices, Kuwait and South Korea have succeeded in further developing bilateral relations in the fields of politics, trade, economy and culture by consistently finding new opportunities in the traditional oil, energy and construction sectors as well as unlocking new sources of growth.

The year 2015 started strong with a landmark event of the President of the Republic of Korea, Her Excellency Park Geun-hye, visiting the State of Kuwait to hold a summit meeting with the Emir of the State of Kuwait, His Highness Sheikh Sabah Al-Ahmad Al-Jaber Al-Sabah, on March 2, 2015, in Kuwait City.

This historical visit, which resulted in the signing of nine agreements emphasizing cooperation in various areas including renewable energy, traffic management, health care and information and communications technology, was followed by more active steps toward achieving expansion and diversification in the Kuwait-Korea partnership.

In May 2015, the Speaker of the Kuwaiti National Assembly His Excellency Marzouq Alghanim visited South Korea to touch on the newly signed agreements between Kuwait and South Korea and plans to effectively implement the agreements for a diversified Kuwait-Korea partnership. He also emphasized the importance of boosting parliamentary cooperation between the two nations. 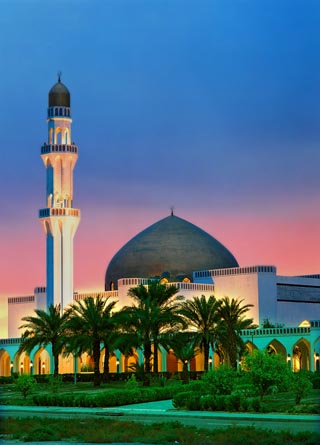 In October 2015, Undersecretary for Ministry of Public Works Her Excellency Engineer Awatef Al-Ghunaim visited South Korea to supervise the fifth session of the Kuwait-Korea Construction Cooperation Committee and explore new business opportunities in the already flourishing construction sector. She introduced new projects which the Kuwait government plans to have ready for tendering to South Korean construction companies eager to do business in Kuwait.

In November 2015, a delegation consisting of representatives from both the public and private sectors of Kuwait and led by Second Vice Chairman of the Kuwait Chamber of Commerce & Industry (KCCI) His Excellency Abdul Wahab Mohammad Al-Wazzan, visited South Korea to take part in a three-day business meeting event, “Kuwait-Korea Business Forum,” jointly organized by the KCCI and Korea International Trade Association. The forum was successful in fulfilling its objective to promote business opportunities between the two nations.

View of Kuwait City, including the landmark Al Hamra Tower and Kuwait Towers.

Finally, in December 2015, the Embassy of the State of Kuwait organized and hosted a three-day event, “Kuwait Cultural Days in Seoul,” where prominent Kuwaiti band “Al-Mass” performed traditional music and talented Kuwaiti artists exhibited paintings and handicrafts, in order to boost cultural awareness and cultural exchange between the two nations.

In addition to arranging and executing these high-level meetings as follow-up measures to the summit between President Park and the Emir in March 2015, numerous business tenders and contracts were secured during 2015.

All these achievements of 2015 serve as confirmation of Kuwait and South Korea’s close and enduring partnership and its potential to grow even stronger.

In the beginning of 2016, the Kuwaiti authorities announced its plans to sign deals worth $55 billion before the year’s end, which exceeds the $32.2 billion in deals awarded last year. Among the new development projects to be launched this year are the $3.3 billion LNG Import Regasification Terminal project in the Al-Zour region, where one of the largest oil refineries and petrochemical complexes in the Middle East is currently under construction, a $500 million Sabah Al-Ahmad Hospital project south of Kuwait City, which is considered a crucial step toward adopting the World Health Organization’s recommendation of providing a minimum of 22 hospital beds per 10,000 citizens by 2030, and the South Mutlaa city project, which will provide 29,000 housing units for applicants.

The first five-year plan, for the years 2010 to 2015, included a total of 1,100 development projects with an estimated $125 billion in value, and as Kuwait’s commitment to its second five-year development plan for the years 2015 to 2020 remains strong and firm, there is no doubt that more South Korean firms will be given the opportunity to participate and support Kuwait’s visionary reform initiative.

In addition to its progress in developing its own nation, Kuwait has played leading roles in providing humanitarian aid for victims of extreme poverty, natural disasters, environmental pollution, diseases and terrorism around the world. On Sept. 9, 2015, the United Nations celebrated the first anniversary of the Global Humanitarian Leadership Award presented to the Emir of the State of Kuwait, His Highness Sheikh Sabah Al-Ahmad Al-Jaber, acknowledging once again the Emir’s noble acts of human kindness.

Kuwait’s foreign policy has always been in line with the Emir’s philanthropic work, which explains the nation’s substantial involvement in the international efforts to tackle global issues and attain world peace mainly in partnership with the Kuwait Fund for Arab Economic Development. Most notably, ever since the start of the civil war in Syria, Kuwait has demonstrated great compassion for millions of Syrian refugees, and was ranked as the world’s fifth-largest donor of direct aid to Syrian refugees in 2015. Kuwait also was the host for the first three International Pledging Conferences for Syria in 2013, 2014 and 2015, during which it pledged $300 million, $500 million and $500 million, respectively. More recently, Kuwait pledged an additional $300 million at the international conference “Supporting Syria & the Region,” which it co-hosted with the United Kingdom, Germany, Norway, and the United Nations in London in February 2016. The conference was internationally recognized for its success in raising over $10 billion in aid for Syrians in need. As such, Kuwait will continue inspiring the world by carrying out its historical tradition of charity and philanthropy.

On the occasion of National Day and Liberation Day, I would like to once again look back and praise the incredible amount of work the State of Kuwait and the Republic of Korea accomplished to expand and diversify its strategic alliance.

I am most positive that this year 2016 will also prove to be a fruitful and vibrant year for the Kuwait-Korea partnership.

I avail myself of this opportunity to express my most profound gratitude to the friendly people and the government of the Republic of Korea and my earnest hopes that our partner continues to enjoy peace, stability and prosperity.