Minjoo courts turmoil by ‘flunking’ 10 of its lawmakers

Minjoo courts turmoil by ‘flunking’ 10 of its lawmakers 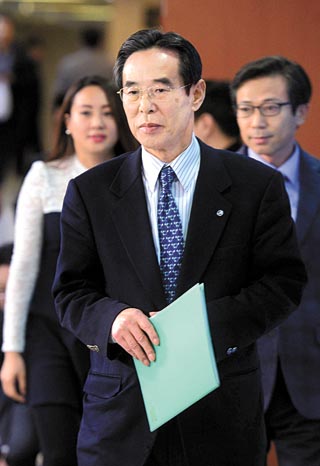 Hong Chang-sun, chairman of the Minjoo Party of Korea’s nomination committee, heads to a press conference in the National Assembly on Wednesday evening. [NEWSIS]

The Minjoo Party of Korea faced internal turmoil Thursday over its nomination process after it flunked 10 of its 108 lawmakers, saying they were not qualified to run in April’s general election.

According to Hong, the committee conducted an evaluation of 127 lawmakers who won the 2012 election on party tickets and decided to fail the bottom 20 percent. That amounted to 25 lawmakers, 10 of whom have already left the party. Four have declared they won’t run in the April 13 races.

The lawmakers were evaluated on criteria including legislative performance, contribution to the party’s victory in elections and district activity. Public opinion polls counted for 35 percent of the evaluation score.

The committee said it will accept appeals from excluded lawmakers before finalizing the decision on Friday. It also said further evaluations of senior lawmakers’ competitiveness will be conducted in order to make room for fresh faces to run.

Both Moon and Yoo were senior members of the Minjoo Party and key allies of the late President Roh Moo-hyun. Moon served as Roh’s presidential chief of staff and Yoo as senior political affairs secretary. Shin, Noh and Kim were also considered members of the Roh faction.

The decision to squeeze out allies of Roh was a major change in the largest liberal opposition party. The party, which used to be led by Roh’s closest ally Moon Jae-in, is now helmed by Kim Chong-in, a reformist who used to support the ruling Saenuri Party and President Park Geun-hye.

Nomination reforms were a key initiative by Moon Jae-in last year, despite the deep disgruntlement of key party members. Rep. Ahn Cheol-soo and other senior politicians abandoned the party in protest of Moon’s reforms. It was, therefore, a surprise that many Roh loyalists flunked the evaluations.

Yoo said he humbly accepted the decision. “I always thought knowing when to leave was an important value,” Yoo said in a press release. “Because the party was in difficulties, I could not decide when to leave, and today came. Everything is a result of my shortcomings, and I hope my retirement will help the party.”

Baek also said he would accept the decision as long as the evaluation was conducted fairly. Noh, who was criticized for operating a credit card terminal in his office to sell a book of his poetry published last year, said he won’t seek re-election.

Not everyone accepted the outcome. Hong Eui-rak, a proportional representative who was preparing to run in Daegu’s Buk B District, left the Minjoo Party on Thursday.

“The party has given up on Daegu. I cannot express my wretched feeling,” Hong said. “There is no point in appealing. I will immediately leave the Minjoo Party.”

Hong said he will run in April as an independent.

The committee’s decision to jettison Hong, despite his efforts to run in a district historically controlled by the conservative Saenuri Party, drew criticism from other Minjoo members.

Kim Boo-kyum, a former Minjoo lawmaker who was preparing to run in Daegu’s Suseong A District, issued a statement demanding the party reverse its decision. “Hong was the only bridge that linked the Minjoo with Daegu and North Gyeongsang, and the committee cut that bridge,” Kim said. “The committee must apologize to Hong and restore his honor.”

While Moon Hee-sang did not make public his reaction, Minjoo Party members in his constituency of Uijeongbu A District held a press conference and demanded the party reconsider its decision. “Ruling out Moon means the party is giving up on northern Gyeonggi,” members of the Minjoo Party’s Uijeongbu A Chapter said in a statement. They said the elder statesman is the only candidate who can beat the Saenuri Party in a district where liberals are weak.

Kim, who was accused of using violence against a designated driver, said she will challenge the decision. She was recently acquitted of a criminal charge in the case. Jeon also said she will appeal.

The Minjoo Party also made a decision on Thursday that effectively ruled out the nomination of another Roh ally, Rep. Kang Gi-jung. The party said it will make a so-called strategic nomination for Gwangju’s Buk A District, where Kang had won three consecutive terms.

A strategic nominee is picked by party leaders, not through a primary. Kang, a former student activist known for hard-line stances, served as chief policy maker under Moon Jae-in’s leadership.