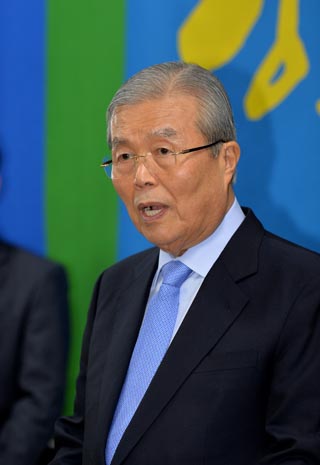 In Gwangju, Kim Chong-in, the interim chairman of the Minjoo Party, called on Thursday for the Sunshine Policy to be revised. [NEWSIS]

The leader of the main opposition Minjoo Party said Thursday that the party’s long-held policy toward North Korea must be revised to reflect the fact that Pyongyang possesses nuclear weaponry.

Kim Chong-in, the interim chairman of the Minjoo Party, made those remarks on a trip to Gwangju, South Jeolla, the opposition’s political home base, in explaining the necessity for a revision to the Sunshine Policy - the foreign policy plan spearheaded by the late President Kim Dae-jung that sought to foster profoundly close relations with Pyongyang.

“The sunshine policy was valid in the past,” he said at a press conference at the Gwangju Metropolitan Council. “However, North Korea policy has to take a major step forward now that the North possesses nuclear weapons.”

“Our goal is to achieve a peaceful unification, the basis of the Sunshine Policy,” he continued. “However, the current situation in North Korea is radically different from before. So I believe it is strategic to provide an alternative policy in a bid to win the next presidential election.”

The interim opposition leader’s “hawkish” comments regarding North Korea have caught public attention in recent weeks, since Pyongyang conducted its fourth nuclear test on Jan. 6 and launched a long-range missile on Feb. 7.

Kim, the architect of President Park Geun-hye’s economic policy during the 2012 presidential campaign, warned against knee-jerk opposition to the shutdown of the inter-Korean Kaesong Industrial Complex, citing a practical need for a united reaction with the international community.

Earlier on Thursday during a tour of a frontline military base, Kim also remarked that North Korea would be “destroyed” one day.

His tone has been markedly different from the majority of opposition lawmakers, including former Minjoo Party Chairman Moon Jae-in, who denounced the conservative Park Geun-hye government for evacuating South Korean workers from the Kaesong complex earlier this month.

“I sincerely apologize for hurting Honam’s pride,” Kim said, using the term referencing Gwangju and the Jeolla region, adding that he regretted disregarding the majority.

The Kaesong Industrial Complex, the last vestige of inter-Korean cooperation under the Sunshine Policy, which was in effect between 1988 and 2008, was shut down on Feb. 10 after the government concluded that North Korea was diverting the money flowing into Kaesong to fund its nuclear and missile programs.