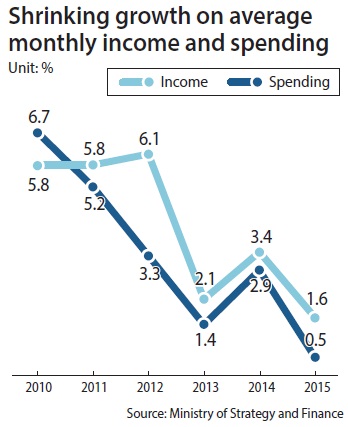 Consumers are spending less despite government efforts to encourage them to open their wallets to help lift the domestic market.

According to the Ministry of Strategy and Finance and Statistics Korea on Friday, a household of more than two people in 2015 spent an average 2.56 million won ($2,070) a month - half a percent less than the previous year.

The growth is a sharp drop from the 2.8 percent expansion in 2014 and is the lowest growth in spending ever recorded. And when the inflation rate is excluded for that year, real spending actually shrank 0.2 percent compared to the previous year.

The drop in spending comes as a surprise, as the government focused on the domestic market in hopes of raising the nation’s economic growth, where exports in particular have been struggling since the beginning of 2015.

The government lowered the key policy rates and eased regulations that limited the amount of loans households can borrow as part of its domestic economy stimulus campaign. Major sales events, including the so-called Korea Black Friday, in the second half were intended to raise sales figures and help Korean companies as well as struggling retail industries.

However, the efforts weren’t enough to encourage people to spend. In fact, it turned out the restrained growth of income was a major contributor to the slowest spending growth last year.

The data provided by both the ministry and statistics office showed that last year, the average monthly household income in Korea was 4.37 million won, a 1.6 percent increase year on year. This is a sharp drop from the 3.4 percent year-on-year growth from the previous year and also the slowest in six years. The last time income grew at such a slow rate was in 2009, a year after the nation’s economy was hit hard by the global crisis of 2008. That year, household average income grew at 1.2 percent.

The data that was released by the government came a few days after the Bank of Korea announced several indicators that deepened concerns of a worsening economic environment.

The Bank of Korea’s deteriorated consumer confidence in the wake of growing uncertainties in the global and domestic markets - including the decelerating Chinese economy and the overly expanding household leverages that now exceed 1,200 trillion won - has raised speculation that more households will likely tighten their purse strings and affect the domestic economy.

However, the government is downplaying such worries.