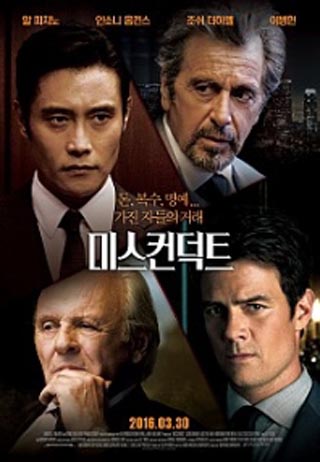 “Misconduct,” featuring Lee Byung-hun, will open in Korean theaters on March 30.
With an all-star cast including Al Pacino, Josh Duhamel and Anthony Hopkins, “Misconduct” is a crime thriller centering on the battle between four men involved in litigation against a big pharmaceutical company.
Ben Cahill (Duhamel), a young and ambitious lawyer, proposes to Charles Abrams (Pacino), the CEO of a law firm, to start a legal battle with a pharmaceutical company run by Arthur Denning (Hopkins). Lee plays the part of an accountant.
The film is Lee’s fifth Hollywood movie after the “G.I. Joe” series (2009, 2013), “Terminator Genysis” (2015) and others. With this being his first non-action movie in Hollywood, Lee will be able to show off his strong character and acting ability for which he is known in Korean films.
The Korean star has been invited to present at the 88th Academy Awards on Sunday. Lee will be the first Korean actor to present an Oscar. After already being cast in “The Magnificent Seven,” Lee will be seen more often in Hollywood going forward.