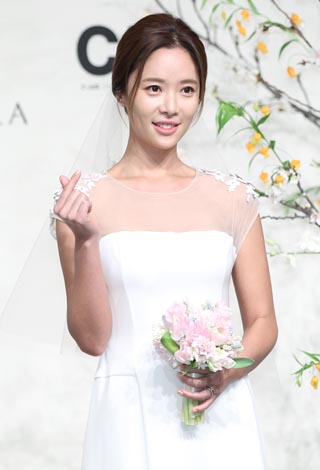 Hwang Jung-eum, a former member of the K-pop girl group Sugar, held a wedding ceremony on Friday.
The private ceremony was held at the Shilla Hotel in downtown Seoul. The groom, Lee Young-don, is a former professional golfer and now an entrepreneur.
Actor Lee Soon-jae and comedian Kim Jae-dong officiated the marriage, and Hwang’s colleague Kim Jun-su of JYJ and actress Jeong Sun-ah sang at the wedding.
Ayumi was the only member of Sugar at the ceremony. “Hwang was the first Sugar member I met in Korea,” the Japanese star said. “Being the same age, we relied on each other in difficult times.”
The 31-year-old bride acknowledged her relationship with Lee last December.
Hwang debuted as a member of Sugar in 2002. Since the group’s break-up, Hwang committed herself to acting and has appeared in many shows and dramas, most notably the second series of the MBC sitcom “High Kick” (2009-10).