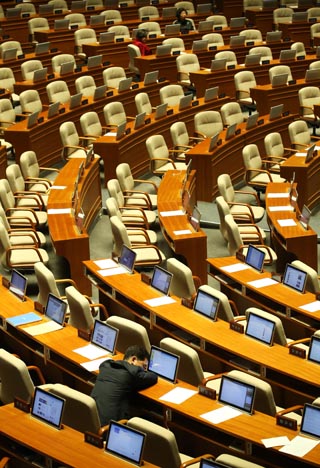 A lawmaker takes a nap at his seat in the almost empty main conference hall of the National Assembly on Friday as other lawmakers continue to filibuster for four consecutive days in protest of the counterterrorism bill. [NEWSIS]

The committee under the National Election Commission met Friday to discuss a new electoral map but failed to conclude the project. The committee has been working on the issue since Tuesday.

“The committee members are exhausted from days of ongoing conferences,” a committee official said. “To be effective, we will resume the conference at 2 p.m. Saturday.”

On Tuesday, the ruling and opposition parties finally reached an agreement on a new standard for redistricting. National Assembly Speaker Chung Ui-hwa subsequently sent the standard to the committee, giving it until Thursday to complete a new map, with the intention that lawmakers would vote on it Friday.

Under the new electoral map, the total number of National Assembly seats will remain at 300. In the upcoming general election, 253 lawmakers representing their own constituencies will be elected, along with 47 proportional representatives. Based on that standard, the committee has been readjusting districts for the creation of a new map, though it has not come to a conclusion.

While no progress was made on the electoral map, the main opposition Minjoo Party of Korea continued its filibuster against a counterterrorism bill sponsored by the Saenuri Party for a fourth day. Lawmakers have contested the bill because they believe it will yield too much authority to the National Intelligence Service, which has a record of meddling in state affairs.