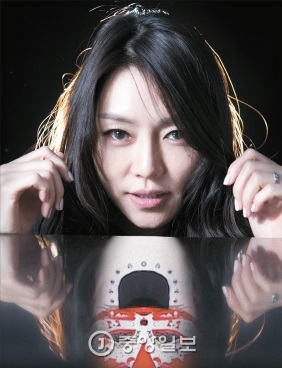 Cha Ji-yeon, a musical performer with a 10-year career, has recently been rediscovered on a TV show. [KWON HYUK-JAE]

Another talented singer has been rediscovered on MBC’s talent show “King of Mask Singer.”

Cha Ji-yeon, who debuted as a musical performer 10 years ago, appeared on the show over the past two months, coming in first place five consecutive times. Such a run has been unheard of since the program began last April.

No matter what genre of song she sang, from ballads to rock or dance, the audience was drawn to Cha’s energy. Although Cha is very well-known in the musical scene and has performed in 16 different shows, she still longs to be a singer who can take the stage alone and share her voice.

Recently, she sat down with the JoongAng Ilbo to share how her experience on the TV program has helped bring her closer to her dreams of being a solo singer.

Q. What made you participate in the program?

A. I was on a singing program called “Immortal Song” on KBS four years ago. At first, I was thinking that it would be like singing in a musical. But I was wrong. Revealing yourself within about 4 minutes in a very direct method was so different from doing a musical, in which I build up my character slowly.

But this time, I was struck by the idea that wearing a mask is more similar to acting, and then decided to go on.

What was it like for you to be on the show?

Before the first shooting, I was sick with a cold. I was getting saline IV infusions right after rehearsal and before the actual filming started at a hospital near the broadcasting studio. And then a light went on the camera, and I just sang my heart out.

You seemed on the verge of bursting into tears couple times on air. Why?

I originally wanted to become a singer. However, I was conned and went through a lot and couldn’t even release an album. I thought I was all healed as I perform in musicals and sing. I didn’t know it would be so heart-pounding to sing with my name out there, and be well-respected for my singing. It felt like I unraveled all the unresolved issues that were hidden somewhere inside my heart. The program was like an exorcism that removed any dark memories from my youth. I’m thankful.

You got married while you were competing on the show. How has that played in your performance?

My husband [Yoon Eun-chae] is also a musical performer. We met early last year when we were doing “Dream Girls” together. We got married after dating for six months. When I started dating him, I become able to sleep without taking any sleeping pills. He gives me mental stability.

How’s performing in the musical “Rebecca” these days?

I play Ms. Danvers, who has a very strong character. I’m breathless because the TV appearances keep my schedule busy, but I think of it as a chance to experience what it’s like to be a celebrity.

Wouldn’t you want to star in a musical that immediately brings your name to mind?

There have been many times that I played a role which was already performed by someone else famous. Fans are also sad about that and tell me to play it smart. However, is it that important who gets to do what and when? There is no end if you start comparing. If I can show my own color, I’ll just take on any challenge.