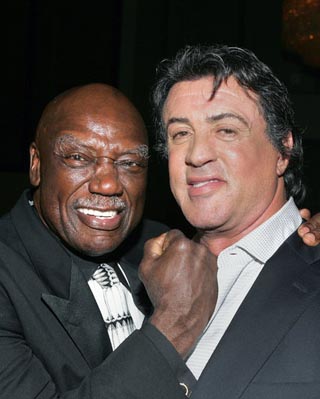 Failing health had prevented him from appearing in “Creed,’’ the seventh “Rocky’’ movie and the one for which Stallone is nominated for a best supporting actor Oscar at Sunday’s Academy Awards.

“People would always ask him, ‘What’s Sylvester Stallone like,’ his wife recalled with a chuckle. “He’d just say, ‘Sylvester’s a nice guy.’ That’s all he’d ever say.’’

Burton, a former boxer himself, had a long career as a character actor.

He appeared in “The Shining’’ and “Stir Crazy’’ and was one of the ballplayers in the 1976 film “The Bingo Long Traveling All-Stars & Motor Kings.’’

He was a regular in the television series “Frank’s Place’’ and appeared in “Chicago Hope,’’ “The Rockford Files’’ and “Sanford and Son.’’

His last major film was 2006’s “Rocky Balboa,’’ in which he prepares the nearly 60-year-old Rocky Balboa character played by Stallone for an exhibition against the current champion, telling Balboa to “bring some hurtin’ bombs.’’

In “Rocky II,’’ Burton tries to talk the champion, who barely won that first fight, out of giving Balboa a rematch.

“He’s all wrong for us, baby,’’ his character says. “I saw you beat that man like I never saw no man get beat before and the man kept coming after you ... Let it go.’’

Born and raised in Flint, Michigan, Burton was a top Golden Gloves boxer in his youth and had a brief professional boxing career.