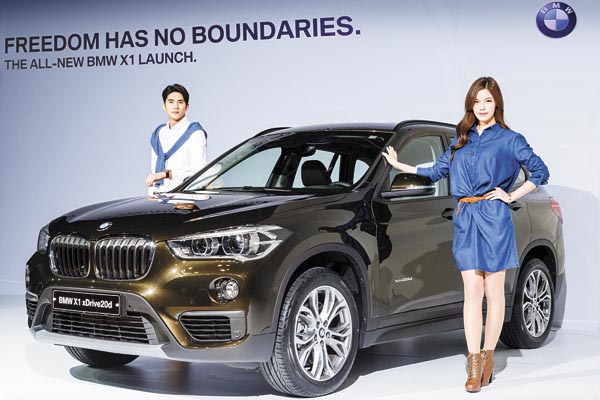 INCHEON - At a launch event held at the BMW Driving Center on Yeongjong Island in Incheon, BMW Korea unveiled the all-new X1 on Friday.

BMW introduced the compact crossover in 2009, and it has sold more than 800,000 units worldwide. This is the first time the automaker has reimagined the model.

The crossover is 53 millimeters (2 inches) taller and 23 millimeters wider than its previous iteration. It also offers drivers more space, with 37 millimeters more legroom.

Gesture Tailgate allows drivers to open and close the trunk with the wave of a foot beneath the rear bumper. Other features include a panoramic sunroof, seven-speaker sound system and LED headlights.

The X1’s trunk now can hold 505 cubic liters (17.8 cubic feet), up 85 liters from the previous model. Storage space totals 1,550 cubic liters with the back seats folded up.

The crossover features a new 2.0 liter diesel engine with BMW’s Twin Power Turbo technology. It generates up to 190 horsepower and 40.8 kilogram-meters of torque (295 pound-feet). It can reach zero-to-100 kilometers per hour (62 miles per hour) in 7.6 seconds and has a fuel efficiency of 14 kilometers per liter (32.9 mile per gallon).

The X1 also includes a head-up display showing speed and other important information, a first among crossovers, according to the company.

The Korea JoongAng Daily got behind the wheel on Friday at the driving center to check out the crossover’s performance.

On the 1.6-kilometer (0.9 mile) Acceleration & Braking Course, I was able to hit 140 kilometers per hour. I was satisfied with how the car’s braking system handled sharp corners.

In order to get a better sense of how a passenger would feel in these extreme driving scenarios, I let another driver take the wheel.

The car didn’t make much noise when the brakes were suddenly applied, and it didn’t swing around in the way I’ve come to expect from crossovers taking sharp turns at high speeds.

But I was disappointed by leg room in the backseat, which I found to be too small for my five-foot-seven frame. I had no problems with leg room in the driver or passenger seats.

On the Off-Road Course, I was able to try the BMW’s Hill Descent Control (HDC) technology. HDC holds the vehicle at certain speed that the driver can predetermine, allowing them to travel downhill without having to manually apply the brakes. I set the X1’s speed at a cautious 9 kilometers per hour, which the vehicle maintained while heading down a steep hill.

The crossover is also offered in an M Sports package, which adds some higher-performance modifications.

In addition to the new crossover, BMW is also rolling out new compact sports utility vehicles (SUVs) to keep pace with its competitors.

Audi released the new Audi Q3 in May 2015. Mercedes-Benz announced its SUV lineup for the local market this year in December, which included the compact GLA.

Luxury compact SUVs are hotter than ever in Korea due to growing popularity among both men and women in Korea. Automakers are doing everything they can to cash in, from adding new features to redesigning the exteriors of forthcoming models.