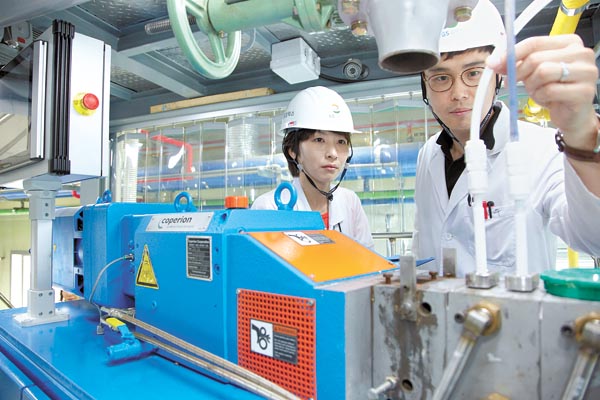 Bioethanol is currently considered the main alternative to petroleum-based fuel, but it is far from perfect.

Due to its easy absorption of moisture and tendency to corrode metal, vehicles must be reconfigured in order to use it in high concentrations. Another downside is that bioethanol cannot be supplied through established infrastructure, requiring additional investment.

Biobutanol, on the other hand, has a higher energy density than bioethanol, which allows it to be mixed with gasoline and used in gas-powered vehicles. Additionally, biobutanol’s low water solubility means that it is compatible with existing transport and storage infrastructure.

Biobutanol is also used in everyday products, acting as the gluing agent in ink, glue and paint, a semiconductor cleaning agent, and a flavoring agent in food, soap and cosmetics. As a result, it has been drawing attention as an eco-friendly chemical.

According to a 2013 study, the annual global demand for butanol is 3.97 million tons, of which the Asian market makes up around 50 percent. This number is expected to rise to 4.9 million tons per year by 2018.

In response, GS Caltex has concentrated its efforts on developing environmentally friendly biobutanol.

While Korean research on biobutanol began in the 1980s, it was not until the late 2000s that research began on a large scale.

GS Caltex has invested more than eight years into the research and development of biobutanol, beginning in 2007. It acquired integrated processing technology encompassing all steps of biobutanol production, from fermentation and absorption to oil refining. In doing so, GS Caltex acquired more than 40 domestic and international patents. As a result, it developed the technology to produce C5 and C6 sugars from woody biomass, lowering production costs.

While developing the pilot plant, GS Caltex sought joint growth with small and medium-size enterprises (SMEs), engaging them early on to localize planning and production. Should the business expand through exports, it is estimated that domestic SMEs will also be given opportunities for growth.

As of today, GS Caltex’s biobutanol technology is being prepared for commercialization, with construction of its demo plant set for the first half of 2016. Afterwards, it plans to sell technology licenses and procure a stable supplier of raw materials for biobutanol production.