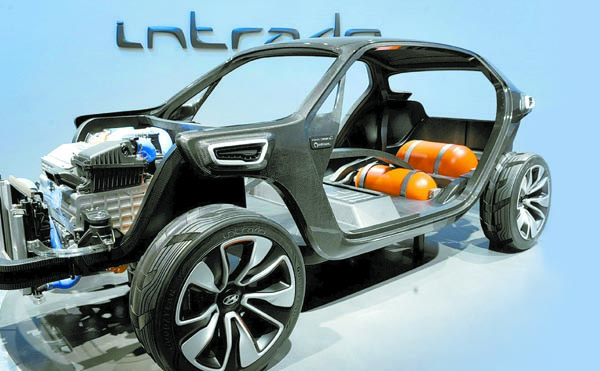 Korean company Kolon Industries is the first in the world to successfully develop a super fiber that is six times stronger than steel.

The company has been tied up in a court battle with U.S.-based conglomerate DuPont since 2009, which accused Kolon of stealing the aramid fiber technology. Kolon settled the case last year by agreeing to pay 380 billion won ($308 million).

However, Kolon says it has successfully developed a new, independent method to make para-aramid fibers, separate from DuPont’s technology.

Kolon’s new para-aramid fiber, which can be used in body armor, hard hats and cable, is groundbreaking. The product is much stronger than regular aramid products while also being eco-friendly. 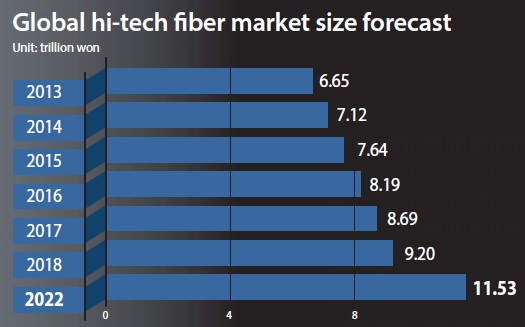 “The most meaningful thing for us is that we finally have developed our own technology that is different from other foreign manufacturers,” said Kim Jin-il, a group leader at Kolon Industries. The company expects to start mass-producing the fiber five years from now.

Local and foreign companies are currently competing fiercely to develop new types of fiber. The market size of super fibers such as aramid is expected to grow to 11.53 trillion won by 2022 from 7.64 trillion won now, according to Japanese research center Fuji Keizai Group.

“Korea’s fiber industry will not have a bright future if we don’t start focusing on producing and developing high-value fibers,” said Dr. Kim Ik-soo, a researcher at the Korea Evaluation Institute of Industrial Technology (KEIT).

Teijin, a Japanese fiber producer, is developing “wearable cosmetic” products that help the skin retain its low acidity. The products will be made from a polyester polymer that contains malic acid to prevent microbes from spreading by producing chemicals that are good for the skin.

Meanwhile, Japanese materials developer Toray is waiting to receive approval from the government to sell its “Hitoe” products. These underwear products measure heartbeat and even offer metrics resembling a cardiogram. 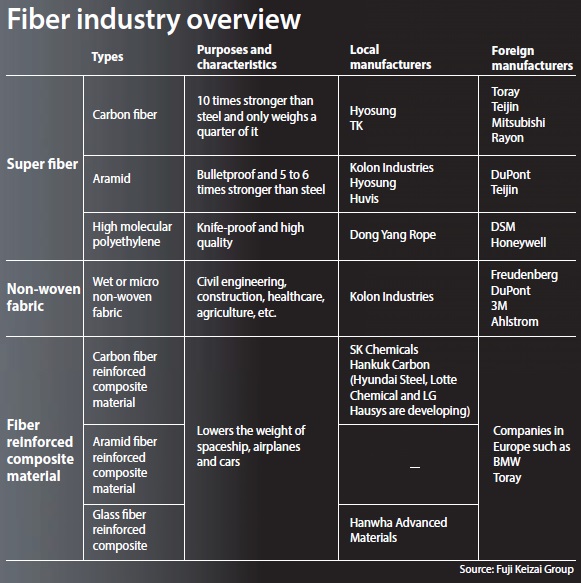 Local manufacturer Ventex has developed “Dry-Zone,” which is a moisture management textile that dries in a matter of seconds.

Companies across the world are competing to develop newer high-tech fibers. The global fiber industry’s market size is growing only about 3 percent per year, and China produces 39.26 million tons, or 70 percent, of the total synthetic textiles produced worldwide.

However, the market size of high-tech fiber materials is growing more than 10 percent per year, and China is far behind these technologies.

Until Kolon’s recent development, sulfuric acid had to be used to make aramid fibers, and it was impossible for them to prevent toxic materials from discharging during the process. However, Kolon was able to find new ways to make aramid fibers by using eco-friendly solvents.

Aramid fibers are a class of heat-resistant and strong synthetic fibers. They are so strong that shoelaces for climbing shoes made by aramid fibers can even be used as climbing ropes.

The United States, Japan and Germany are focusing on four specific types of fibers. They are trying to develop super fibers that include carbon and aramid fibers, fabric products such as blood filters, fiber-reinforced composite materials and smart fibers that are combined with information technology.

Carbon fibers are often called “dream materials” since they are 10 times stronger than steel while only weighing a quarter of it. Additionally, the fibers never become rusty, and they work very well with heat and chemicals.

Due to these characteristics, manufacturers of airplanes, ships and cars are very interested in these fibers.

Carbon fibers are now widely used in manufacturing cars. Automakers can lower the weight of a car by about 400 kilograms (880 pounds) if they use carbon fiber-reinforced plastics. The product saves manufacturing time and can improve safety as the fiber can absorb high-impact collisions.

Toray, Teijin and Mitsubishi Rayon currently account for 65 to 70 percent of the global carbon fiber market, and they have successfully developed new manufacturing technologies that raised productivity 10 times. Japanese companies are likely to maintain their strong competitiveness in the market for some time.

In Korea, Hyosung was able to develop carbon fibers with its own technology in 2011, and it currently operates a factory in Jeonju, North Jeolla, that produces 2,000 tons of fibers annually.

“We have 20 employees that work on spandex, in which we are leading the global market, but we have more than 80 employees that only focus on carbon fibers,” a Hyosung representative said. “We are prepared for the new fiber industry that is likely to approach very soon.”

In terms of the technology of non-woven fabrics, Korea is currently No. 4, following the United States, the European Union and Japan.

The phrase “the fiber industry will never fall down unless human beings decide not to wear clothes anymore” is widely repeated by fiber industry insiders. However, a large number of fiber manufacturers that were doing well in the 1970s and ’80s have now disappeared.

“We are now facing a new challenge as the market is transforming from traditional fibers to high-tech fibers,” said Lee Jae-woo, a marketing director at Hyosung. “We need to move fast in order to avoid falling behind the change.”

It takes about 10 years for a manufacturer to start mass production after it has developed new products.

Toray, the world’s largest carbon fiber manufacturer, started developing carbon fibers in the early 1960s and finally went through mass production in the early ’70s. Toray spends around 3 percent of its yearly sales, or about 600 billion won, in research and development.

“I believe more cars, especially the premium cars that cost more than 50 million won, will use carbon fibers,” said Akira Uchida, a senior vice president of Torey, in an interview with JoongAng Ilbo. “Many say we have reached significant technological development, but I believe we can develop fibers that are much better than the current products.”

Toray and Uniqlo launched their Heattech products in 2003 after throwing away thousands of prototype products during the trial period. Now, the sales output reaches nearly 100 million.

Uchida said the two companies will work together at least until 2020. He added that the company will make about 10 trillion won in profit in five years.

Kim Jin-il, a researcher at Kolon Industries, said it was important for the government to set up financial assistance programs.

“Sixty percent of the research we are doing are currently on three-year projects, and there has not been many long-term projects until recently,” Kim said. “This shows that we have actually changed our views on research and development.”

Kolon and Hyundai Motor are currently developing hybrid battery cars using fibers. However, there are conflicts among stakeholders in the fiber industry involving dyeing, marketing and distributing.

Uniqlo has successfully eliminated these conflicts. The money they are saving is being used in research and development.

“Korea is the only country in the world that has both general fiber manufacturing facilities and research centers for high-tech fiber,” said Kim Joo-yong, a professor at Soongsil University. “Korea has high potential to make synergy effects.”

Kim emphasized that companies need to plan ahead to mix traditional technology and newer advancements. Local manufactures will be able to make various kinds of fiber products such as shoes and clothes if the government eases some of its regulations and aids them.

“The government can take advantage of currently operating sewing factories in Busan, textile mills in Daegu and cottage industries in Pocheon,” Kim said.

There are currently about 170,000 employees working in the fiber industry. They account for about 6 percent of total employees in the manufacturing business.

However, certain factors, such as the recent free trade agreement between Korea and China, are hindering the fiber industry.

“We need to find ways to revitalize some of the companies by making an environment for them to develop new types of products,” said Kim Ik-soo, a researcher at KEIT.