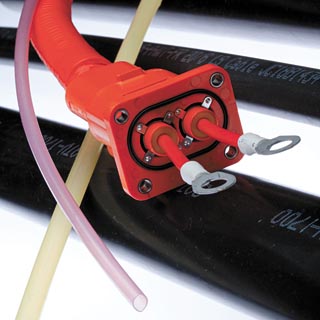 One of the high-voltage harnesses that LS Cable & System will supply to Beijing Automotive Industry Holding for use in its electric vehicles. [LS CABLE & SYSTEM]

The harnesses consist of a bundle of cable or wires that have multiple uses in automobiles, such as sensor operation and connection of the electronic control system and communication module. Unlike ordinary vehicles, which require harnesses in the 12-volt range, electric cars require harnesses of a much higher voltage of 600.

For LS C&S, this is another major step in solidifying its foothold in the electric car component market in mainland China. The company is already a business partner of BYD Auto and Dongfeng Motor, which are both big players in the Chinese market. BYD is the leader among China’s electric car manufacturers, and Dongfeng ranks second in the Chinese vehicle market.

China’s electric car industry saw 220,000 vehicles sold last year. This number is predicted to hit two million by 2020, as the Chinese government is continuing policy efforts to further activate the electric car industry. On the way, LS C&S plans to pull up its share in China’s harness market from its current 6 percent to the 10 percent range by 2020.

LS C&S’s new partner BAIC is a state-owned company and a leading manufacturer of passenger cars in China. The company has been pushing investments in eco-friendly cars for some time and is listed among the world’s top 10 electric car manufacturers. Its future plans for the sector include expanding its production line and developing 14 additional eco-friendly models by the year 2017. The first model to install LS C&S’s product is the EV200, which is scheduled to be released this upcoming August.

LS C&S expects that the recent contract will lead to other contract opportunities for future models.

“The reason we were able to win BAIC’s bid instead of a major Chinese competitor was because we managed to win the client’s trust by adapting to the client’s requests and utilizing their feedback in a timely manner,” said Yoon Jae-in, CEO and president of LS C&S. “The high-voltage harness is one of LS C&S’s growth engines through which we plan to seize the initiative in the Chinese market for electric car components.”

LS C&S stepped into the high-voltage harness business in 2009 when it developed the product by applying high-voltage technology to its existing electric wires and cable technology for cars.