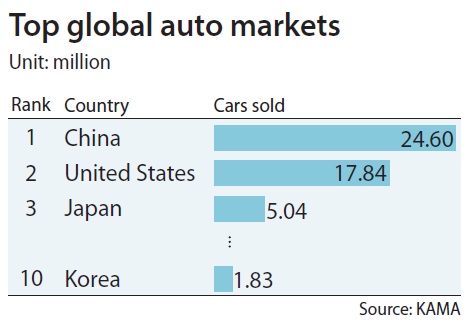 Korea became the world’s 10th-largerst auto market last year for the first time in history despite the struggling global economy, largely thanks to the government’s tax cuts.

According to Korea Automobile Manufacturers Association (KAMA) on Friday, a total of 1.83 million new cars were sold in the country last year, a 10.3 percent rise from a year earlier. Korea now accounts about two percent of the world’s entire auto sales. The total number of cars sold was 91.65 million, a rise of only about one percent from 2014.

“Auto sales in most advanced countries such as the United States increased year-on-year, but sales in emerging markets such as Russia, Brazil and Indonesia declined mainly due to the slumping global economy, with the fall of overall prices of raw materials and oil playing a large role.”

Korea struggled to export its cars, but saw total production increase by 0.7 percent on year to 4.56 million. This was largely because of the government’s temporary individual consumption tax cut.

But it is unclear if auto sales in Korea will continue to increase this year. After the tax cut ended in December, automakers saw their sales significantly drop in January.

The five automakers sold a combined 106,308 units last month, 39.8 percent less than in December. These were the lowest sales recorded since February 2013, when the five sold 98,826 units.

Making matters worse, local automakers don’t have many new wheels to roll out this year.

Hyundai has already rolled out its new hybrid Ioniq, and Kia launched the new K7 sedan last month. Hyundai’s next release won’t be until the second half, when it will roll out its new Grandeur large size sedan.

RSM has also already rolled out the new SM6 sedan, which is considered its best weapon to boost sales.