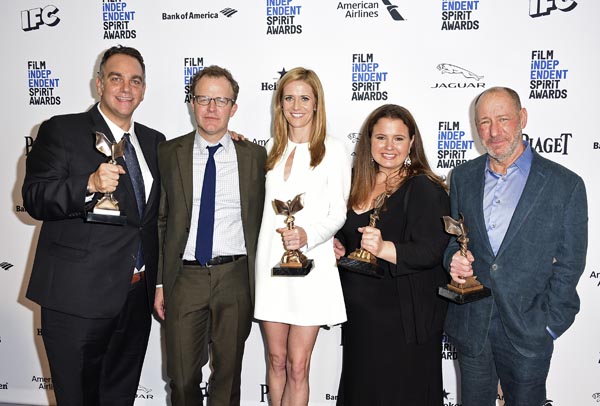 Michael Sugar, from left, Tom McCarthy, Blye Pagon Faust, Nicole Rocklin, and Steve Golin pose in the press room with the award for best feature for “Spotlight” at the Film Independent Spirit Awards on Saturday, in Santa Monica, California. [AP/NEWSIS]

The newsroom drama “Spotlight” was the big winner at the Spirits on Saturday, the day before it’s to compete for best picture at the Academy Awards. Tom McCarthy’s film about the Boston Globe investigation into sex abuse by Catholic priests won a leading four awards, including best picture, best director for McCarthy, best screenplay and the Robert Altman award for ensemble.

But this year’s Spirit Awards, an annual dressed-down oceanside indie antidote to the Oscars, was most remarkable for its more diverse nominees and winners. Neither Elba, Attah nor Taylor was even nominated for Oscars. Each drew hearty applause.

“There is very beautiful transgender talent,” said Taylor, who won best supporting actress for playing a Los Angeles sex worker in the iPhone-shot “Tangerine.” “You better get out there and put it in your movie.”

In recent years, the Spirits have overlapped considerably with the Oscars, including the last two top winners: “Birdman” and “12 Years a Slave.” But this year, the Spirits - which honor films made for $20 million or less - widely deviated from their stuffier crosstown counterparts.

“Spotlight” was the only best picture nominee up for the Spirits’ top award; the bigger budget Oscar favorites it’s vying with, “The Revenant” and “The Big Short,” didn’t qualify. And while the Oscars have been beset by criticism for a second straight year of all-white acting nominees, the Spirits boasted five nonwhite nominees out of 20 - and three of them won.

“I’m so much prouder of being a producer than my performance,” Elba said backstage about the Netflix release. “As a producer you face a lot of doors being closed in your face and in this case we did have a hard time making it but we got there in the end.”

Elba brought Attah up on stage to share in his award for best supporting actor, but Attah later won one of all his own. The young Ghanaian, who hadn’t acted before director Cary Fukunaga cast him in “Beasts of No Nation,” beamed before a standing ovation.

Kate McKinnon (“Saturday Night Live”) and comedian Kumail Nanjiani hosted the ceremony, which was broadcast live on IFC. In their opening remarks, Nanjiani introduced themselves as a Pakistani American and a gay woman, “or to Hollywood, a straight woman and her IT guy.”

The only Oscar acting favorite, Brie Larson, added another win for her performance in the captive drama “Room.” Emma Donoghue, the novelist-turned-screenwriter, also won for best adapted screenplay for the film.

Without the competition of “The Revenant” or “The Big Short,” the wins for “Spotlight” likely don’t suggest any better fortunes for the film at the Oscars. But McCarthy took the opportunity to celebrate the movie’s distinction as an independent film, released by indie distributor Open Road.

“Quite honestly, we need studios like this who are going to step up when the other studios won’t,” said McCarthy, with several of the reporters the films is based on in the crowd. He also shared in best screenplay with his cowriter, Josh Singer.

At the irreverent and breezy Spirit Awards, held in a tent on the Santa Monica beach, indie-hood can be a badge of honor. In Saturday’s ceremony, none could top writer-director Trey Edward Shults, who won the John Cassavetes Award for first feature made for under $500,000 for his “Krisha.”

“What can I say,” said Shults. “We made this film in nine days at my mom’s house and it stars my aunt.”