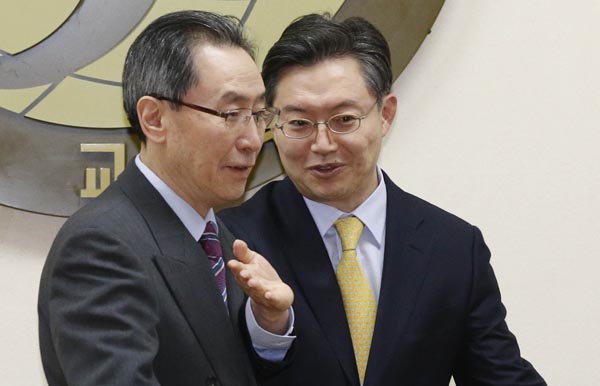 Hwang Joon-kook, right, special representative for Korean Peninsula peace and security affairs, points to seats to begin talks while his Chinese counterpart Wu Dawei heads in another direction, trying to shake hands with other officials in the Korean delegation, at the Ministry of Foreign Affairs in Seoul on Sunday. [JOINT PRESS CORPS]

A United Nations Security Council resolution calling for strong sanctions on North Korea to punish it for a fourth nuclear test and long-range missile launch is being delayed as Russia, a veto-wielding member of the council, has asked for more time to review it.

This resolution had been expected to be voted on by the 15-member council over the weekend in New York, and Seoul had anticipated it would be adopted by the end of February at the latest. Negotiations have been underway since Pyongyang’s Jan. 6 fourth nuclear test.

According to Oh Joon, the South Korean ambassador to the United Nations, “Russia has simply asked for more time to review it, so we do not know how much delay there will be.”

Russian deputy permanent representative to the United Nations Pyotr Ilyichev told reporters that Moscow needed time to study the resolution as it contains “a vast number of details” and “there are many proposals there that we need to analyze,” reported Russia’s state-run Itar-Tass News Agency Friday. He added that the Russian delegation to the UN would be ready to vote “next week.”

However, some analysts wonder if Russia is stalling not because it finds fault with the resolution but to demonstrate its clout in the wake of Washington and Beijing’s agreement on it.

China, as a permanent member of the council and Pyongyang’s longtime ally, was considered the key to the passing of the resolution.

After Foreign Minister Wang Yi’s visit to Washington last week, the White House announced Wednesday that Beijing was on board a UN Security Council resolution “that goes beyond previous resolutions.”

The resolution, described by U.S. Ambassador to the United Nations Samantha Power as the “strongest set of sanctions imposed by the Security Council in more than two decades,” is expected to require for the first time all cargo going in and out of North Korea to be inspected. It will impose financial sanctions targeting North Korean banks and assets, as well as call for sectoral sanctions that could ban exports of North Korean coal and minerals and halt imports of aviation fuel.

After the draft resolution was shared with council members, it was expected to be put to a vote by as early as Saturday.

The other 14 members of the council agreed to the draft resolution. The sole hold-out is Russia.

Moscow has emphasized from the beginning that sanctions should not lead to a humanitarian or economic collapse of North Korea.

Amid the delay, Wu Dawei, China’s chief negotiator to the six-party North Korea denuclearization talks, kicked off a five-day visit to Seoul Sunday, which included a meeting with foreign affairs and Blue House officials. This marks Wu’s first visit to South Korea in five years, his last visit being in April 2011.

Upon arriving at Incheon International Airport, Wu, the special representative for Korean Peninsula Affairs, told reporters that South Korea and China could discuss any issue “based on mutual respect” and “as strategic cooperative partners.”

There is special interest to see what direction Beijing takes in regard to the deployment of the U.S.-led Terminal High Altitude Area Defense (Thaad) system in South Korea, a move which it has vociferously opposed.

A Thaad missile defense unit comes with a powerful radar system that can cover more than 1,000 kilometers (621 miles), and China and Russia have expressed concerns that the radar could be used as a possible method of surveillance against them.

This comes as Washington has toned down the urgency of the placement of a Thaad battery on the Korean Peninsula in response to North Korea’s nuclear and missile threat.

Last Tuesday, Seoul and Washington delayed at the last-minute the signing of a “terms of reference” agreement that would form a joint working group to discuss the details of the placement of the Thaad system

In a joint press conference with Chinese Foreign Minister Wang Yi in Washington later Tuesday, U.S. Secretary of State John Kerry played down the urgency of the placement of a Thaad battery in Korea, saying that the deployment of the anti-missile defense system can be prevented by resolving the issue of the nuclear program in North Korea. This followed discussions with Wang agreeing to a tougher Security Council sanctions resolution on Pyongyang.

Likewise, Adm. Harry Harris, commander of the U.S. Pacific Command, on Thursday downplayed the certainty of the Thaad deployment saying, “The decision to discuss it is not necessarily a decision to do it.”

During a Seoul visit Friday, U.S. Assistant Secretary of State Daniel Russel emphasized that “Thaad is not a diplomatic bargaining chip,” adding there is “no connection between what is going on in the diplomatic track in the UN Security Council and the question of the deployment of Thaad.”