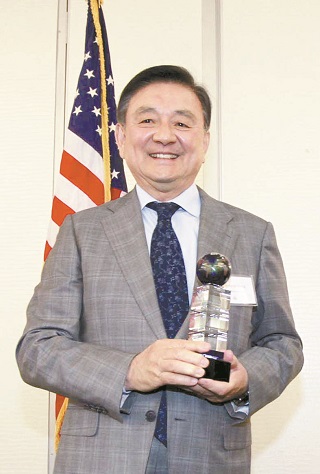 Hong Seok-hyun, chairman of the JoongAng Ilbo and JTBC, received the Pacific Century Institute’s Building Bridges Award on Thursday in Los Angeles for his contributions toward raising understanding of the Asia-Pacific.

He is the first Korean to receive the prestigious annual award, which was established by the nonprofit Pacific Century Institute (PCI) in 2000 to honor people who have enhanced relations between Americans and Asians and have exemplified its commitment to “building bridges to a better future.”

Donald Gregg, chairman of the PCI board of directors, noted Hong’s editorial in the Global Asia Summer 2015 edition, “Breaking Out of the Rut: Broadening the Spectrum for Engaging North Korea,” which called for an innovative engagement policy with Pyongyang. Gregg, a former U.S. ambassador to Seoul, went on to say he was also “deeply impressed” by the JoongAng Ilbo’s “Peace Odyssey” series last year.

A group of over 30 leaders in politics, academia, media and culture made a six-day pilgrimage in June to points across China’s border with North Korea, traveling a distance of 1,400 kilometers (870 miles) to mark the 70th anniversary of the division of the Korean Peninsula and to seek the meaning of the separation and how to achieve unification.

Hong received the award at a ceremony at the Intercontinental Hotel Century City in Los Angeles attended by over 220 diplomats, scholars, policy makers and journalists including former U.S. ambassador to Seoul Kathleen Stephens, a 2011 recipient of the award; Raymound Burghardt, former U.S. ambassador to Vietnam, a 2006 recipient; William Overholt a senior fellow at the Harvard Asia Center and CBOL Corporation Chairman Spencer Kim, a co-founder of PCI.

The Fulbright scholarship program team in Korea was the recipient of the institutional category of the Building Bridges Award.

“I believe that my experiences in the United States, and the lessons that I learned during my time here in the United States, have played at critical role in my career and I have many Americans to thank for helping me to reach the point in my career at which I am honored with such an award,” said Hong at the ceremony, recalling his experiences as a graduate student at Stanford University, an economist with World Bank and as a diplomat.

Hong, a former Korean ambassador to the United States, gave a speech on the “Rise of China and the Future of the American Role in Asia” at the ceremony that highlighted the challenges of engaging Beijing and also holding it to a higher standard.

“If the U.S. welcomes a flourishing China, I believe that Beijing will respond to that encouragement and play a more responsible role,” said Hong.

“The U.S. and China should embrace the zeitgeist of a highly networked global village in the 21st century,” he added, “and join forces to usher in a future-oriented and reciprocal order in East Asia based on true reciprocity.”

He emphasized that the six-party talks among China, Japan, Russia, the United States and the two Koreas could serve as a precedent for “meaningful multilateral governance.”

“Although the agenda of the six-party talks so far has been limited to the question of North Korean denuclearization, it nonetheless has served as an unprecedented venue for negotiations that include the major countries of Northeast Asia,” said Hong. “If the United States can address serious issues together with Northeast Asian countries in the case of North Korea, it will be a dramatic example of cooperation between two giants in the region: the U.S. and China.”

He also emphasized Korea’s role as a “middle power in Northeast Asia.”

Hong continued, “I also believe that Korea can function as a facilitator to create a new order built on common ground between the U.S. and China and East Asia as a whole.”