Firms see gloom on the horizon

Firms see gloom on the horizon 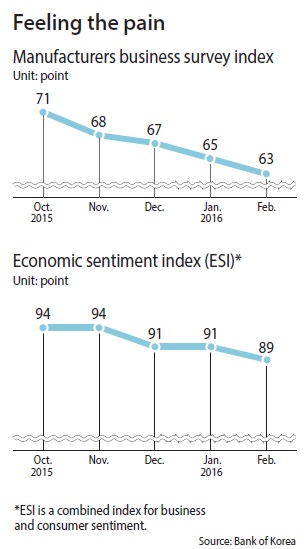 Korean companies are more pessimistic about the economic situation than they have been in seven years, sending alarming signals to the government about a frozen domestic market.

According to the Bank of Korea on Monday, its business survey index (BSI) hit 63 in February, down two points from the previous month.

The indicator has fallen for four consecutive months and is now at its lowest level since March 2009, when the Korean economy was recovering from the U.S.-triggered global financial meltdown.

The central bank surveyed 3,313 companies across the nation from Feb. 15 to 22. Of them, 2,869 were manufacturing firms, while the remaining 1,121 were in other industrial sectors.

A BSI reading above 100 means there are more companies that are optimistic about the economy, while a reading below the level shows there are more pessimists than optimists.

When private consumption nearly froze during the outbreak of Middle East respiratory syndrome last June, the index fell to 66, higher than February’s figure.

Aside from companies, consumers are also gloomy about the economy. The central bank’s consumer sentiment index for February dipped two points to 98 compared to the previous month.

The government has repeatedly claimed that the Korean economy can achieve 3.1 percent growth this year, but companies and the general public seem to think otherwise.

Consumer and business sentiment indices are critical because they can determine the broader outlook for the economy. If sentiment continues to wane, it means more and more households will tighten their purse strings and companies will refrain from investing.

“Uncertainties about an economic recovery have grown significantly, aggravating business sentiment,” said Park Seong-bin, head of the business statistics division at the central bank. “On top of persisting declines in the export sector due to slowing growth in emerging economics including China, the introduction of a negative interest rate in Japan and greater geopolitical risks on the Korean Peninsula added to uncertainties.”

In response to an ongoing contraction in domestic spending and investment, the Bank of Korea decided last week to expand its lending limit for commercial banks by 9 trillion won to 25 trillion won to help solve liquidity problems of small and midsize exporters, and to get them to spend more on domestic production facilities. It was part of a governmental “mini-stimulus package” announced in early February.

The Ministry of Strategy and Finance also extended a suspension of the consumption tax on automobile purchases until June to boost spending.

However, 24 percent of the surveyed companies pointed to slowing demand in the domestic market as a major difficulty.

“The government’s mini-stimulus package seems rather late,” said Lee Jun-hyup, an economist at Hyundai Research Institute. “This is a difficult situation in which households are seeing their income growing too slowly, while companies are finding it hard to increase investment because of falling profitability.”

Another reason for the dire outlook among local businesses is Korea’s declining exports. Compared to January, more companies are feeling anxious about the export sector, data showed.

A subindex for the country’s exporters slid six points to 61 in February from 67 a month earlier. The drop in the figure clearly shows that local exporters are suffering falling demand for their products in overseas markets amid lower-than-expected growth of the world economy and increasing financial jitters in capital markets across the globe.

Total exports plummeted 18.5 percent in January, the steepest fall in six and a half years.

According to data by the Korea Customs Service, total exports plunged 18.3 percent from Jan. 1 to Feb. 20 compared to the same period last year.