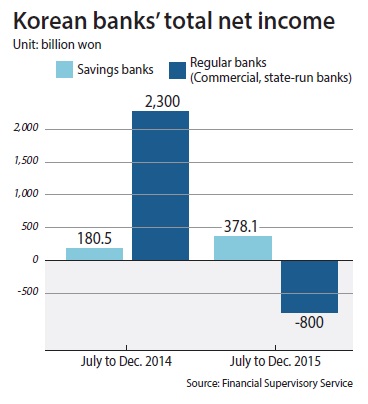 While Korean commercial banks struggled with falling earnings last year, savings banks saw their earnings surge by more than 50 percent in the second half last year.

Savings banks, which in Korea are more like consumer finance companies, are non-financial institutions that are considered less reliable and offer interest rates in the 20 percent range to high-risk borrowers.

The government suspended the operations of seven insolvent savings banks in 2011 for having lower than 1 percent Bank for International Settlements (BIS) capital adequacy ratio. Hundreds of account holders were unable to withdraw their money.

After years of struggle, the savings banks have rolled out an earnings surprise after continuous efforts to scrap bad loans, the Financial Supervisory Service (FSS) said on Monday.

Savings banks saw their management costs and non-interest income diminish, as income via non-lending businesses such as insurance product sales fell. However, interest income worth 1.3 trillion won, a rise of nearly 30 percent year on year, offset the loss.

The asset soundness also got healthier, as the proportion of delinquency rates for loans posted only 9.3 percent, down by 2.3 percentage points compared to six months ago. The portion of bad loans also dropped by 2.2 percent to post 10.2 percent during the same period.

The BIS capital adequacy ratio also posted 14.33 percent as of December last year, up 0.04 percent compared to six months ago.

The good news at savings banks is starkly different from commercial and state-run banks, which suffered a sharp fall in earnings due to a hefty amount of bad loans and shrinking net interest margin.

The total net income of major banks during the second half of last year posted a loss of 800 billion won, compared to 2.3 trillion won during the same period a year earlier, according to FSS data.

However, the financial watchdog warns that savings banks should try to come up with alternative sources of profit - non-interest income - because their individual lower-credit borrowers may have difficulty paying back the loans as the government tightens regulations to slow down the expansion of household debt.

“The savings banks in general are expanding their business while seeing their capital soundness enhanced,” said Yoon Chang-eui, head of the savings bank supervisory division at the FSS. “But at the same time, they will have to strengthen risk management capability as their assets are expanding mostly on loans.”

At a meeting with savings bank executives on Monday, the FSS announced that it will this year tighten the BIS capital adequacy ratio and capital soundness requirements on large savings banks with assets of 1 trillion won or more, in a bid to keep their assets sound.

The FSS also said it will require all savings banks to stipulate their lending interest rate calculations to make sure they keep the lending interest on individual household borrowers at a reasonable level.

Ryu Chang-won, senior researcher at the Hana Institute of Finance, warned that savings banks should prepare for future competition with commercial banks and web-based banks.

“Savings banks should lower their lending interests to compete against the mid-range loan programs offered at other types of financiers,” Ryu said. “They should also shift their flagship model to pursue long-term non-guaranty-based lending products, which are more geared toward small businesses in each community.”