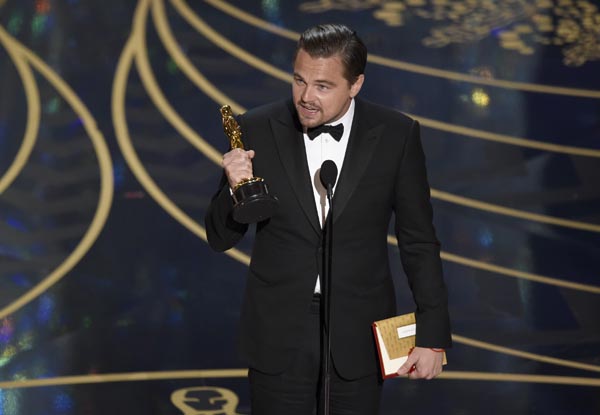 Leonardo DiCaprio accepts the award for best lead actor for “The Revenant” at the Oscars on Sunday at the Dolby Theatre in Los Angeles. [AP/NEWSIS]

LOS ANGELES - In an underdog win for a movie about an underdog profession, the newspaper drama “Spotlight’’ took best picture at an Academy Awards riven by protest and outrage, and electrified by an unflinching Chris Rock.

Tom McCarthy’s film about the Boston Globe’s investigative reporting on sexual abuse by Roman Catholic priests won over the favored frontier epic “The Revenant.’’ McCarthy’s well-crafted procedural, led by a strong ensemble cast, had lagged in the lead-up to the Oscars, losing ground to the flashier filmmaking of Alejandro Inarritu’s film.

But “Spotlight’’ - an ode to the hard-nose, methodical work of a journalism increasingly seldom practiced - took the night’s top honor despite winning only one other Oscar for McCarthy and Josh Singer’s screenplay.

Such a sparsely-awarded best picture winner hasn’t happened since 1952’s “The Greatest Show On Earth.’’ 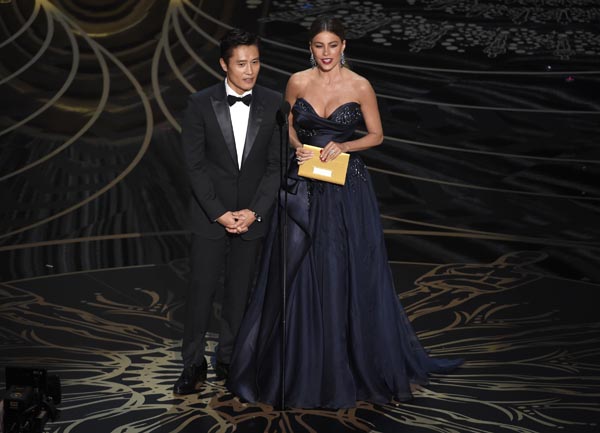 Lee Byung-hun, left, and Sofia Vergara present the award for best foreign-language film at the Oscars. Lee is the first Korean actor to attend the Academy Awards as a presenter. [AP/NEWSIS]

“We would not be here today without the heroic efforts of our reporters,’’ said producer Blye Pagon Faust. “Not only do they effect global change, but they absolutely show us the necessity for investigative journalism.’’

The night, however, belonged to host Rock, who launched immediately into the uproar over the lack of diversity in this year’s nominees, and didn’t let up.

“The White People’s Choice Awards,’’ he called the Oscars, which were protested beforehand outside the Dolby Theatre by the Rev. Al Sharpton, and saw some viewers boycott the broadcast.

Still, streaks, broken and extended, dominated much of the evening.

After going home empty-handed four times previously, Leonardo DiCaprio won his first Oscar, for a best actor in “The Revenant’’ - a gruff, grunting performance that traded little on the actor’s youthful charisma. DiCaprio, greeted with a standing ovation, took the moment to talk about climate change. “Let us not take our planet for granted,’’ he said. “I do not take tonight for granted.’’

His director, Inarritu won back-to-back directing awards after the triumph last year of “Birdman.’’ It’s a feat matched by only two other filmmakers: John Ford and Joseph L. Mankiewicz.

“The Revenant’’ also won best cinematography for Emmanuel Lubezki, who became the first cinematographer to win three times in a row (following wins for “Gravity’’ and “Birdman’’), and only the seventh to three-peat in Oscar history.

Inarritu, whose win meant three straight years of Mexican filmmakers winning best director, was one of the few winners to remark passionately on diversity in his acceptance speech.

“What a great opportunity for our generation to really liberate ourselves from all prejudice and this tribal thinking and to make sure for once and forever that the color of our skin becomes as irrelevant as the length of our hair,’’ said Inarritu.

There was another major surprise Sunday. The supporting actor win for Mark Rylance over Sylvester Stallone drew gasps. Stallone, nominated a second time 39 years later for the role of Rocky Balboa, had been expected to win his first acting Oscar for the “Rocky’’ sequel “Creed.’’

He instead lost to the famed stage actor who co-starred in Steven Spielberg’s “Bridge of Spies.’’

The composer John Williams (“Star Wars: The Force Awakens’’) came in with his 50th nod, but lost to Ennio Morricone, who, at 87, landed his first Oscar for Quentin Tarantino’s “The Hateful Eight.’’

Sam Smith and songwriting partner Jimmy Napes picked up the Academy Award for best song for “Writing’s on the Wall,’’ from the James Bond film “Spectre.’’

Best animated feature film went to “Inside Out,’’ Pixar’s eighth win in the category since it was created in 2001.

“Even in the darkest hours of mankind, there might be a voice within us that allows us to remain human,’’ said Nemes. “That’s the hope of this film.’’