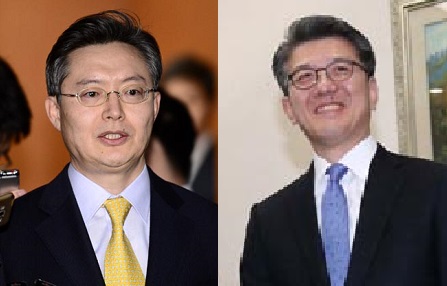 Hwang, whose official title is special representative for Korean Peninsula peace and security affairs, was appointed the Korean ambassador to the United Kingdom. That post has been vacant since the former envoy to Britain, Lim Sung-nam, was named first vice foreign minister in October.

“Special Representative Kim has worked with the Blue House and as a deputy minister since the advent of the Park Geun-hye administration and has an extensive understanding of the foreign policy of the current government,” a Foreign Ministry official said.

Kim passed the foreign service examination in 1984 and previously served as the director-general for the Korean Peninsula Peace Regime Bureau and deputy secretary-general of the National Security Council (NSC) secretariat.

He has also held positions in countries including the United States and Belgium. He was named deputy foreign minister for political affairs in March 2015 after having worked with the presidential NSC since 2013.

The official added that during the time Kim served as director-general for the Korean Peninsula Peace Regime Bureau between 2009 and 2012, he dealt with the sinking of the Cheonan warship in March 2010 at the hands of North Korea, as well as the with the death of North Korean leader Kim Jong-il on Dec. 17, 2011. Pyongyang denies sinking the Cheonan.

“He was involved in tasks related to responding to North Korea’s provocations and responding to changes in the internal situation,” the source said.

The six-party talks were a platform originally formed with the two Koreas, Japan, China, Russia and the United States with the aim of convincing Pyongyang to abandon its nuclear program. The talks, however, have been stalled since 2008, when North Korea walked away from negotiations.

Yet the post remains instrumental for discussing North Korea nuclear issues with other members of the six-party talks.

Hwang was presented with his credentials as Korea’s top envoy to the United Kingdom by President Park Geun-hye at the Blue House later in the day. He was initially nominated to the post in November, though his appointment faced delays due to the nuclear and missile provocations carried out by North Korea earlier this year.

“Because of the emergency situation, the timing of the appointment has been delayed, but the United Kingdom is a permanent member of the United Nations Security Council and a very important country to us, not only in the process of the adoption of a sanctions resolution on North Korea, but beyond that as well,” the ministry official said. “That is why we determined that it is not appropriate to leave the seat empty any longer.

“Also, the shift came at the appropriate time, as the UN Security Council resolution on North Korea is in its final stages.”

Hwang, a career diplomat, is said to have overseen Kim’s training for his new post. On Sunday, Hwang met with his Chinese counterpart, chief nuclear envoy Wu Dawei, in what was his last duty as South Korea’s six-party talks negotiator, a position he has held since April 2014.

He has strong ties with the United States and previously served in posts in the United Kingdom, Saudi Arabia and at the United Nations in New York.