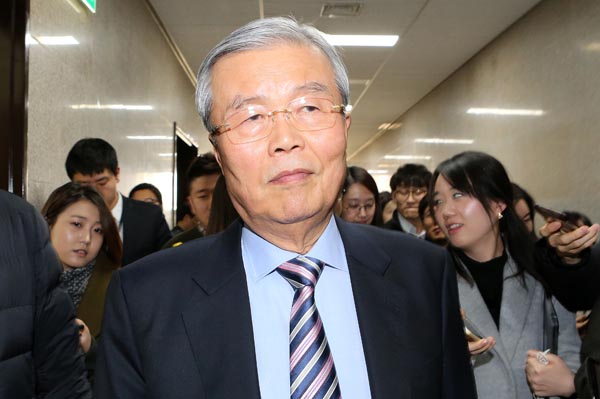 The leaders of the main opposition Minjoo Party of Korea on Monday voted unanimously to transfer nomination power to the party’s emergency committee, headed by interim Chairman Kim Chong-in.

The decision means that Kim now has discretionary power to nominate or expel incumbent lawmakers for the general election and recommend proportional representatives.

“Party leaders unanimously agreed to grant the emergency committee the right to establish and interpret party regulations for issues related to the election, and only until the general election day,” Minjoo Party spokesman Kim Sung-soo said.

Thirty-five out of 59 leaders were present at the meeting.

He said he was prepared to step down if his appeal was rejected.

“I am not here to field my own people into the election,” he said. “For the presidential election, we need strong candidates who can represent the face of the party to the public. But current party regulations make it hard to provide an opportunity for these candidates.”

“The delay in the passage of the election bill has made it difficult for candidates to prepare for the general election,” party spokesman Kim Sung-soo said. “Due to the time constraints, the party’s leaders decided to transfer nomination rights to the emergency committee, which will ensure the party’s flexible and punctual response to changing election schedules.”

Hong Chang-sun, chairman of the nomination committee, announced Friday that the committee had decided to exclude the bottom 20 percent of the 127 lawmakers elected in 2012 on party tickets.

That amounted to 25 lawmakers, 10 of whom have already left the party. Four have declared they will not run in the April 13 races.

“While the Yongin region is the backyard of the ruling party, [we have a chance with] Baek, who commanded the Third Army Headquarters there,” Kim Chong-in said Sunday. “Rep. Hong is also a candidate in a difficult region [northern Daegu]. A nomination policy that cuts candidates off without considering their backgrounds and strengths makes no sense.

But with nomination power transferred to the emergency committee, Kim Chong-in, in restoring some lawmakers, will have to exclude others.

The faction behind Rep. Chung Sye-kyun, whose members - including Kang Gi-jung - were recently cut off from the nomination process, remains unhappy.

“I hope Rep. Kang will understand the current situation and the needs of the party,” spokesman Kim Sung-soo said. “The decision was made for the good of the party as a whole.”

Jeon Jeong-hee, a lawmaker who was also excluded from nomination, left the Minjoo Party on Monday.