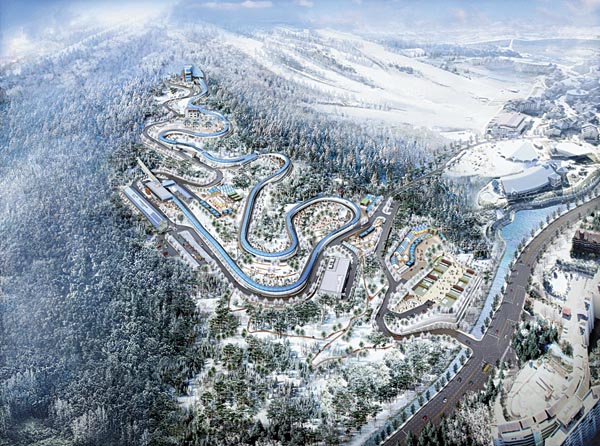 Alpensia Sliding Center, a venue for sliding events during the 2018 Pyeongchang Winter Olympics including bobsleigh, skeleton and luge, was unveiled at Alpensia Resort, Pyeongchang on Monday.

Alpensia Sliding Center is the 20th sliding track in the world and the second in Asia after Nagano, Japan. Construction began in Oct 2013 with a total investment of 100 million dollars. The total length of the track is 2,018 meters to commemorate the year in which Pyeongchang Olympics is being held. However, the length of the track where the actual competitions will take place is 1,857 meters, longer than the 1,814 meters track at the Sochi Olympics and 1,700 meters at the Vancouver Olympics. The track also features 16 curves, one curve less than the Sochi Olympics. 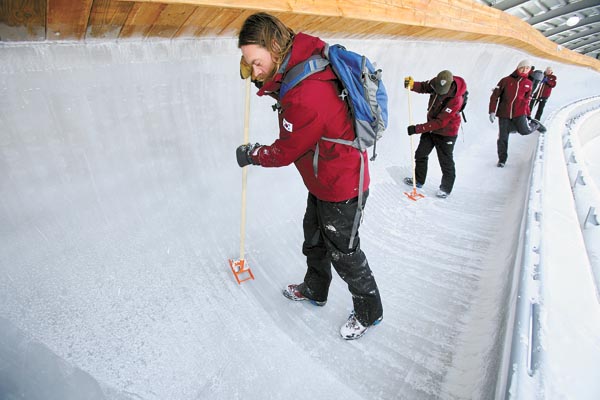 Ice makers working on the ice surface. There are 26 ice makers from Korea and abroad that maintain the track surface. [NEWSIS]

“I think the average speed will be about 135 kilometers per hour (84 miles per hour). Racers will have to stay alert from the beginning until the end of the race. With the variety in the level of difficulty for the curves, the course will offer an interesting and challenging experience for the racers.”

During the upcoming test events, racers will go through test runs to inspect the overall stability and completeness of the course. The test runs were introduced to prevent accidents after Georgian luger Nodar Kumaritashvili was killed during a training run at the Vancouver Olympics. “The Alpensia Sliding Center is the first course constructed based on the regulation established by International Olympic Committee and other international organizations related to bobsleigh, skeleton and luge after the Vancouver incident.” said Kang. “It was designed so that the racers will not exceed a certain speed limit.” 74 international racers and 31 South Korean racers will participate in the test events.

For South Korea, which recently produced a world No.1 crew in the two-man bobsleigh, and world No.2 skeleton racer Yun Sung-bin, the construction of Alpensia Sliding Center is a promising signal. When asked about its significance, Lee Yong, head coach for bobsleigh and skeleton national team, commented, “With a track right here at home, South Korean racers will have the competitive edge compared to racers from other countries who are yet to have a home course.”