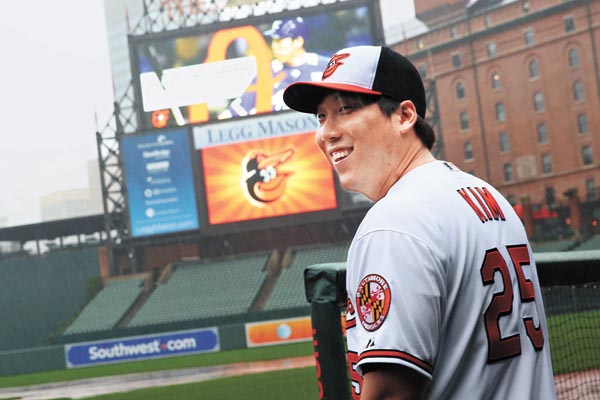 Baltimore Orioles Kim Hyun-soo is adjusting to the life in the United States as he prepares himself for his first season in Major League Baseball. Although feeling pressured to perform well, Kim hopes that he can encourage other players and open doors for South Korean baseball players to challenge the Big League. [JOONGANG ILBO]

Kim Hyun-soo of the Baltimore Orioles greets his teammates in Korean. Although some might think he is struggling with a lack of English, Kim says he is only following the request of his teammates who ask him to say certain things in Korean.

Kim joined the Orioles at the team’s spring camp on Feb. 6 to prepare for his debut season in Major League Baseball (MLB). His appearance was much anticipated and created a lot of excitement, not just by the team but also by the league and local media.

MLB.com recently posted a series of articles on the expected positions for the 2016 season, projecting batting lineups and positions of 32 Major League teams.

In the article on the Orioles, MLB.com predicted that Kim will be second in the lineup playing left field. This is perhaps the most plausible scenario, although some local media think that Kim will be first in the batting order considering his performance last season with the Doosan Bears.

While recording 101 base-on-balls (BB), Kim was struck out only 63 times. Kim’s overall KBO personal record stands at 597 BBs and 501 strike-outs. This means his KBO on-base percentage is 0.406, indicating his sharp batting eye. If Kim were to stand on the plate before other players, his sharp eyes could bolster Orioles’ chance to get on base from the get-go. Even Orioles manager Buck Showalter praised Kim for his “ability to pick and choose pitchings for BBs.”

MLB.com forecast that Kim will be second in the lineup after Manny Machado who marked 0.286 batting-average (BA), 35 home-runs, 86 runs-batted-in (RBI) and 20 stolen-bases last season. This would make Machado and Kim the mainstays for the Orioles followed by the batting order of Adam Jones, Chris Davis, Mark Trumbo, Matt Wieters, Jonathan Schoop, J. J. Hardy and Dariel Alvarez.

Q. How are you managing to adjust to the MLB?

A. Second baseman Ryan Flaherty gave me a warm welcome when I first arrived. He used to play with Korean players such as Lee Hak-ju while playing for Chicago Cubs. So I think it was easier for him to approach a South Korean player. He actually came to me first to play catch. Flaherty asked me what young people say to greet their elders in Korea. When I taught him An-nyung Haseyo (hello in polite Korean), he got really excited.”

What do other players call you?

They call me “Soo.” I guess “Hyun” is a little difficult for them to pronounce. My name is also written in the training schedule as “Soo.”

You were known for the amount of training you did while in Korea. Is it different here in the United States?

Frankly, the team training here is very different. In Korea, we often had three to four days of hardcore training with a rest day afterwards. Here, we don’t really get a day off. I have to be on the alert constantly to practice every day. Practice sessions are somewhat different as well. For example, we often did a lot of batting practice in Korea. Here, we just go in for a pick-up game without much batting practice. I think the mentality here is rather than practicing 10 times at a mediocre level, it is better to have three intense ones.

This is your first season at the MLB. Are any players picking on you?

I honestly don’t know. Even if someone did say anything mean to me, I wouldn’t be able to understand. So let’s just say no one is picking on me (laughing).

Do you feel pressured to do well?

I am very close to Kang Jung-ho of the Pittsburgh Pirates. I have been staying in touch with him to get advice on how to cope with life here in the United States. Frankly, the reason other Korean batters such as myself were able to sign good deals with the MLB teams is because of Kang’s outstanding performance last season.

We owe him big for that. But it is true that MLB teams expect us to perform as well as Kang. So there is definitely pressure for us to follow his example. I also feel I should do well this season so I could open doors for other Korean players as well.

What’s your expectation with batting order and position?

I met manager Showalter for the first time last Thursday. I heard he was a charismatic person but our meeting was not as intense as I expected. He didn’t say much other than to get myself ready for the season. He saw my physique so I seriously doubt he will put me first in the lineup.

From where I stand, I must be prepared to take any position that comes my way. If the manager tells me to be a catcher, then I better be ready.

Will you continue with your Korean batting style?

The reason I obtained many BBs was because I batted aggressively from early on. This made the pitchers reluctant to throw straight balls. I also tried to figure out the strike zone of umpires and hit all the balls that travel inside. I will do the same thing at the MLB. Once I have enough ball counts, I think I could at least get some foul balls.

Do you think you have adjusted well to life here in the United States off the field?

I have a long way to go. Apparently, in the United States, female reporters are free to enter the locker room during clubhouse business hours. It was definitely a culture shock for me. I did not know this until recently when I found a female reporter in the locker room when I was about to change. I think I’m going to start changing my clothes in the bathroom from now on (laughing).