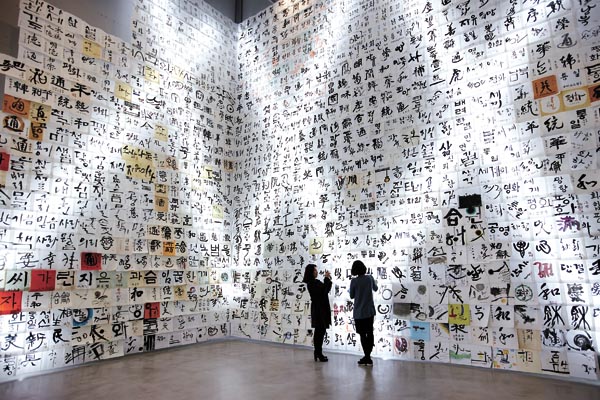 The Calligraphy Museum of the Seoul Arts Center has reopened with an exhibition on reunification after undergoing renovation that took almost a year and a half. The museum displays works that combine calligraphy and installation arts. [SEOUL ARTS CENTER]

The Seoul Arts Center has reopened the Calligraphy Museum after renovations, which took nearly a year and a half.

The museum is opening its doors again with a new exhibition related to Korean reunification that kicked off yesterday, a day that celebrated the Independence Movement that took place in 1919.

The Calligraphy Museum first opened in 1988, becoming the first-ever museum on calligraphy in the world, but later it struggled with facilities that lagged behind the technology.

Thus, the museum went through a large-scale remodeling process, equipping itself with a new archive facility, restoration facility and exhibition halls all dedicated to representing experimental, contemporary and historical works. The overall size increased twofold as well.

The issue of reunification was chosen as the first exhibition theme after the renovation. The exhibit consists of three sections: a hope for independence, Korean reunification and world peace. Each part reflects the past, present and future of Korea and the rest of the world.

In the first section, “Distant View” by artist Park Ki-won and “Poem Mandala” by artist Choi Jeong-hwa are on display. The two works express the hope for Korean independence and peace in Northeast Asia.

In the second section, a work of Suh Yong-sun titled “South and North” is on display along with “Life Tree,” created by artist Choi Jeong-hwa. In addition, the same section features hanging pictures and calligraphy works by historical figures, including Kim Koo, Syngman Rhee, Park Chung Hee and Kim Dae-jung, that discuss the divide between the two Koreas.

In the third section, “World is One” created by architect Cho Min-suk is on display.

“Reunification should not only be seen as a political matter,” said Lee Dong-kook, the director of the museum. He also told the Korea JoongAng Daily that cultural content, such as calligraphy, could possibly contribute in Korean reunification.

“There is a growing notion that calligraphy is fading away from Korean culture,” he added. “However, our museum thought that calligraphy should also have a voice on current social issues. The museum is planning numerous exhibitions in which calligraphy can suggest social agendas for society.”

The museum will also continue to put on exhibitions that can combine different areas of art such as media art and music.

The current exhibition runs until April 24 at the Calligraphy Museum at the Seoul Arts Center. It is closed on Mondays. Tickets cost 5,000 won ($4) for adults and 3,000 won those under 18. Admission is free for seniors over 65. For more information, visit www.sacticket.co.kr or call 02-580-1300.