14-month fall in exports is the longest in history

14-month fall in exports is the longest in history 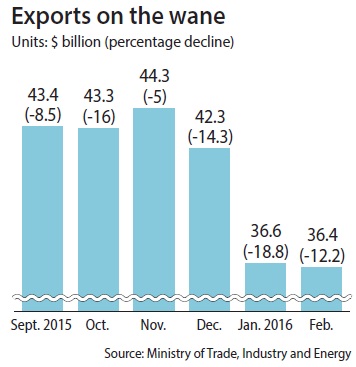 Korea’s exports posted another double-digit decline in year-on-year growth in February, as demand shrivels with the slowdown in China and unit prices of major products remain low.

According to the Ministry of Trade, Industry and Energy on Tuesday, the nation’s total exports were $36.4 billion in February, a 12.2 percent fall from the same month last year. Exports shrank for the 14th straight month, the longest such streak in Korea’s history.

Compared to a shuddering 18.8 percent year-on-year fall in January, the rate of decrease fell slightly last month. However, since exports are the main growth component of the Korean economy, the February figure strongly suggests the government’s 3.1 percent growth target for GDP this year is unattainable.

“Outbound shipments of major products dropped in February amid persisting adverse conditions - low oil prices, falling unit prices and a global slowdown,” said Lee In-ho, a deputy trade minister. “The government forecasts that exports will continue to go downhill in the midst of growing uncertainties in the global economy.” 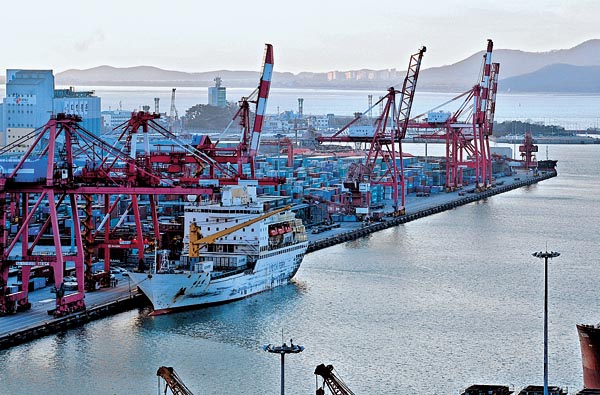 The Port of Incheon appears idle on Tuesday when the Ministry of Trade, Industry and Energy disclosed that the nation’s total exports were 36.4 billion dollars in February, a 12.2 percent fall from the same month last year. Exports shrank for the 14th straight month, the longest such streak in Korea’s history. [NEWSIS]

According to the ministry’s analysis, exports of vessels plummeted by a whopping 46 percent in February from a year earlier, leading the overall decline. The fall is attributed to a lengthy slump in the global shipbuilding market.

Semiconductor exports dipped 12.6 percent year on year because of price declines of dynamic random-access memory chips from $3.44 per 4 gigabytes to $1.84.

On the other hand, exports of mobile communication devices rebounded with 2.8 percent growth in February, largely thanks to the launch of the Samsung Galaxy S7 smartphone, compared to a 6.9 percent fall in January.

“Cosmetics and OLED panels - the new promising export items - showed significant increases in February,” Lee said. “The government will come up with a comprehensive plan to ramp up exports of those promising products within the month.”

Commodity imports plunged 25.5 percent year on year mainly due to oil prices hovering around $20 per barrel. Korea imported $2.8 billion worth of crude oil last month, nearly half of the $4 billion in the same month last year. The average crude oil price was $55.7 per barrel at the time.

“The oil price trend is a very important factor in forecasting the upcoming exports,” the official said. “We can be certain about a rebound in our exports after seeing the oil price starting to be restored.”

Oil prices are considered a crucial indicator in determining whether the world can expect better economic recovery, the official explained.

“In conclusion, it will be difficult to expect better figures in our exports unless we are sure about recovery in the advanced world and rebounds in oil prices,” he said.