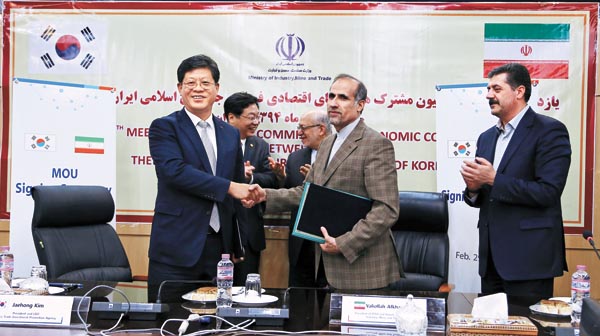 Kim Jae-hong, CEO of the Korea Trade-Investment Promotion Agency, shakes hands with Valiollah Afkhami Rad, head of the Iran Trade Promotion Organization, on Monday in Tehran after signing an agreement to strengthen cooperation on trade. [KOTRA]

The state-run trade agency said on Tuesday that it signed a memorandum of understanding with the Iran Trade Promotion Organization on Monday local time at the group’s headquarters in Tehran.

Under the agreement, the two agencies will work on jointly hosting seminars and exhibitions aimed at boosting trade and investment opportunities among the countries.

They will also exchange trade experts while sharing information on commerce and investment trends.

“The agreement is meaningful because it touches on a wide range of sectors encompassing the exchange of information, personnel and business,” said Kim Jae-hong, CEO of Kotra.

On the sideline of the signing ceremony, a small business fair was held to connect 27 small and medium-sized companies with Iranian buyers.

Kotra first signed an agreement with its Iranian counterpart back in 2007, but the measures could barely take effect because of the heavy sanctions by the international community.

The new agreement reaffirms those measures while adding the sharing of information.

Many state-run organizations both from Korea and abroad that have flocked to Iran, which is poised to reopen following years of strict sanctions resulting from the country’s nuclear ambitions.

Trade Minister Joo Hyung-hwan has been in Tehran to attend the 11th Korea-Iran Joint Economic Committee since Feb. 29, where he has been discussing major economic cooperation issues for the first time since 2006. 