Oscars get lowest rating since 2008

Oscars get lowest rating since 2008 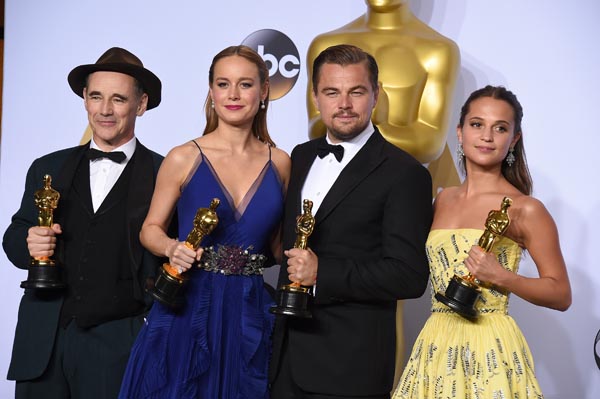 NEW YORK - Academy Awards viewership dipped to its lowest level since 2008 in a year where the movie industry’s ability to reflect the nation’s diversity was a central issue.

Since 1990, only two Academy Awards telecasts had fewer viewers: in 2008, when “No Country For Old Men” won best picture, and in 2004, when “Chicago” was honored. The peak came when “Titanic” won a boatload of awards in 1998 and 55 million people tuned in.

The paucity of minority nominees this year led to calls for a boycott among some black stars, including Jada Pinkett Smith and Spike Lee. But Nielsen did not immediately have any ethnic breakdown of Oscar viewership. Generally, the popularity of movies being honored tends to be the biggest factor in whether the audience for the live telecast is up or down.

Rock, in his second time hosting, hardly stayed away from the diversity issue. He peppered the audience with his first three jokes on the topic within 25 seconds.

The most recent awards shows, the Golden Globes and Grammys, also saw ratings declines. The Globes, which honor film and television, were seen by 18.5 million people, down from 19.3 million in 2015. The Grammy telecast hit a seven-year low in viewership.

Many years, the Oscars are television’s biggest event after the Super Bowl.

The final half hour of ABC’s pre-show telecast was watched by 22.2 million people, down from 23.8 million last year, Nielsen said.

Twitter marked a milestone, however: Leonardo DiCaprio’s best actor award generated 440,000 tweets in a minute, the fastest ever counted at the Academy Awards. The previous Twitter highlight came two years ago when Ellen DeGeneres made her star-studded selfie.