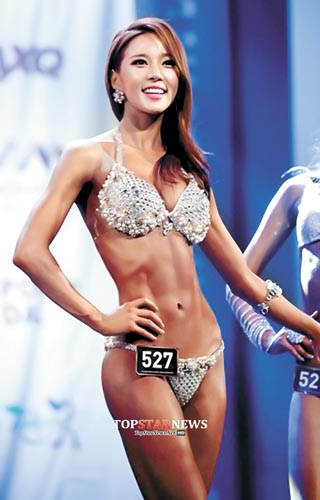 Two years ago, office worker Oh Yu-mi decided to do weight training, not the usual workouts that include jogging and cycling, when she realized she was getting plump after years of working all day and eating late at night.

A year later, the 32-year-old decided to participate in the Musclemania World Championship in order to motivate herself to eat healthier and work out harder. She worked out with weights at least three times a week.

In 2015, Oh was able to nab first prize in the model segment of the international competition. Among other winners who work out for a living, Oh, an ordinary office worker, certainly stood out.

“I decided to participate in the program out of concern that I was on the verge of losing myself, gaining weight every day due to so many nights of working and eating,” she said. 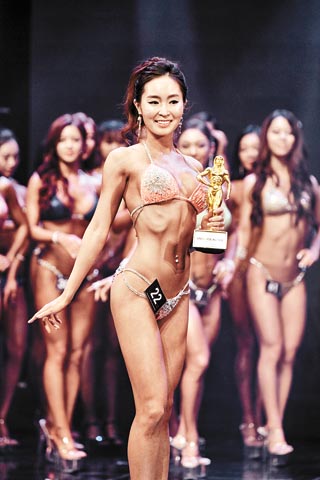 Oh Yu-mi, an office worker, won the top prize at the 2015 Musclemania World Championship for the model segment. [OH YUN-MI]

While she worked hard at her job, which led to successful results, she could not help losing confidence in herself as she started to gain weight.

Situations like Oh’s are becoming more common in Korea these days, as working women in their 20s and 30s are beginning to work out in hopes of regaining their self-confidence.

Some may say this phenomenon is nothing new, but what’s different from the past is that these women are not just trying to get skinny, but they are trying to get in shape including building muscle.

As celebrities with muscular bodies appear on the small screen more frequently, the ideal body type is shifting as well. And getting personal training, known as PT, is becoming more popular among women.

According to the survey carried out by the JoongAng Ilbo on 150 women in their 20s and 30s, 62 percent of the respondents or 93 people said they care more about their body shape rather than their facial appearance.

And 83 percent answered that they’ve been to a fitness center, which translates to 126 people.

Also, among the people who answered that they’ve been to a fitness center, 78 of them said they registered at the center because they wanted a muscular body. This number was far greater than those who said they went to the gym for simple weight loss, which was only 26 people. Seven respondents said they exercised due to health issues.

When asked about their ideal body type, 49 percent of respondents picked “a muscular body with a healthy look.”

“Two or three years ago, more than 70 percent of the customers were men,” said Kim Sang-soo, who has been running his own fitness center for the past seven years in Yeoksam-dong, southern Seoul. 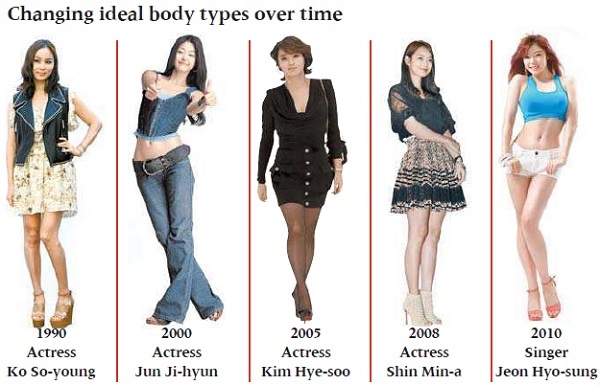 “But now, we are getting more female customers,” he said, adding that most women “want a muscular body that is only available through weight training rather than just a simple slender body.”

Yang Min-hwa, who goes by the nickname Ray Yang, is another sign of the latest fitness trend. The 29-year-old, who has won two top prizes at the Musclemania contest, has become a celebrity in Korea, appearing in various TV commercials and talk shows where she shared tips for maintaining a healthy-looking body like hers.

“A lot of women who are on diets go through a constant up-and-down of their weight, which is also called yo-yo syndrome,” she said.

“I think the latest trend reflects women’s desire to get a sustainable body shape and stay healthy at the same time,” she added. 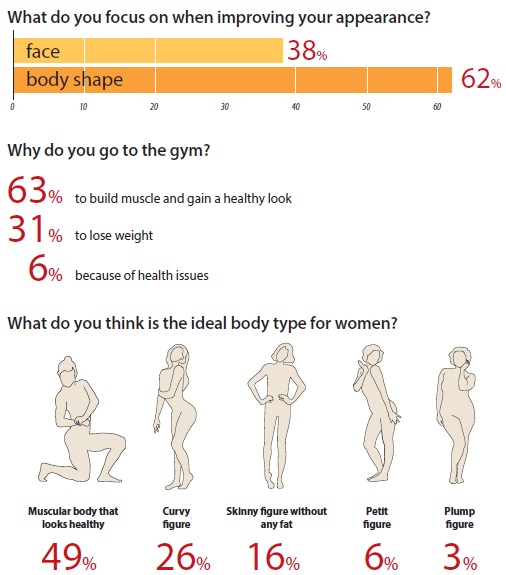 Yang revealed that she herself suffered after trying various dieting methods, which resulted in damaging her health without making her look any better than before.

From what’s called a “one-food diet,” where you consume only one type of food, to just not eating anything, she has tried everything she could to stay slim. But at every attempt, she not only failed at losing weight, she also got depressed and suffered from temporary bulimia.

She resorted to exercising more instead of changing her eating habits drastically, which enabled her to overcome certain side effects and stay fit as well.

However, some people point out that the latest trend is resulting in what’s called “fitness poor,” which refers to people who spend unnecessary amounts of money on exercising.

Kim Sa-eun, 28, is another office worker who gained weight due to working late into the night and eating too many unhealthy foods. It was impossible for her to move around inside her office, and having to eat dinner with her colleagues at least two times a week led her to gain 11 kilograms (24 pounds) in just one year.

So she registered at a fitness center near her workplace and also hired a personal trainer, which cost 80,000 won ($65) per hour. She knew herself well enough to know that if she didn’t have personal training, she would stop going to the center after a few days.

Having a personal trainer by her side to guide her in doing weight training, which can be at times dangerous, and also push her just enough to test her limits certainly helped her to get a handle on all the complicated fitness equipment at the center. Not only did he make her exercise, but he also helped her watch her diet as well.

However, working out like that three days a week cost her more than 1 million won in the first month. Spending that much of her monthly income on working out naturally lead her to curtail her daily spending.

“At first, I thought it would be an investment to myself,” said Kim.

“But as time passed by, the cost was becoming too much of a burden for me. It was literally spending most of my monthly income on exercise, and now I don’t know if I should stop going to the fitness center or keep doing for the sake of my health,” she added.