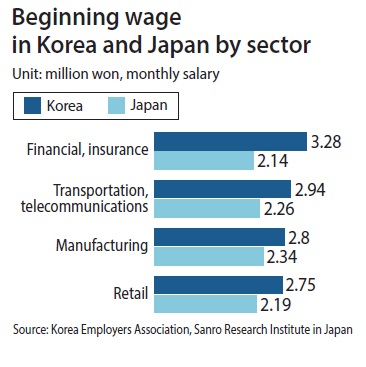 Korean commercial banks and state-run banks are preparing to cut the salaries for entry-level staff, which managements says is “excessively” higher than other sectors.

According to the financial industry on Monday, the Employers’ Council of the Korean financial industry, a group that consists of heads of commercial banks and state-run financial institutions, is holding its first meeting this week to come up with an action plan to overhaul salary and performance evaluation systems in the banking industry.

The council is known to have set up three principles for wage negotiation this year: to reduce the starting salaries for college graduates, implement a performance-based salary system, and to set up a fair employee evaluation system.

“Except for insurers, the starting salary for college graduate newbies at commercial banks is excessively high compared to the usual salary level at other sectors,” Ha Young-koo, chairman of the council and chairman of the Korea Federation of Banks, said at a meeting on Feb. 4. “Such a high starting salary doesn’t match the supply-and-demand of labor in the finance industry.”

The financial sector is the first group of employers actually trying to adjust the salary system, ever since the Korea Employers Association (KEF) recently issued a salary guideline for its members.

In early February, the KEF rolled out a salary guideline that basically directs its member companies with starting salaries of 36 million won ($29,196) or higher to expand new hirings of entry level staff by slashing the starting salary. This is the first time in 41 years that the business lobby group has suggested a specific starting salary to its members.

Minister of Employment and Labor Lee Ki-kweon said he supported the move because “adjusting excessively-high starting wage is a must in narrowing the huge gap in the Korean labor market.” He said the initiative is a solution to stable employment for young college graduates and a growing senior population.

However, the proposal has met with strong opposition by unions.

Kim Moon-ho, head of the Korean Financial Industry Union, announced that the group cannot accept the shift to a performance-based salary system and cuts on starting salary, at a unions’ meeting last Thursday.

The group also decided not to make any official response to managements’ demand, until the annual salary negotiation sessions, scheduled for April 7.

Salaries for entry-level jobs for four-year college graduates begin at an average 50 million won at the nation’s largest four commercial banks, Shinhan, Woori, KB Kookmin and KEB Hana. This is higher than the same job positions at foreign banks and those entry-level jobs at other local conglomerates.

The average salary for Korean financial sectors increased to the current level, as employers raised overall salary levels as compensation for massive layoffs during the 1998 Asian Financial Crisis.

Following the financial sector’s lead, labor unions of major conglomerates also urged their managements to give them a raise.

The move was aimed at narrowing the salary gap between employees at large companies and small and midsize firms, the managements say.

In other countries, the salary gap for entry-level workers is not large at companies of different size or types of business.

In Japan, monthly salaries for entry-level workers are fixed at somewhere between 2.1 million won and 2.2 million won as of the end of last year. The gap between large and small companies was estimated to be about 540,000 won annually, a lot smaller than an annual difference of 15.43 million won in Korea.