At the Pangyo cluster, challenges and potential

At the Pangyo cluster, challenges and potential 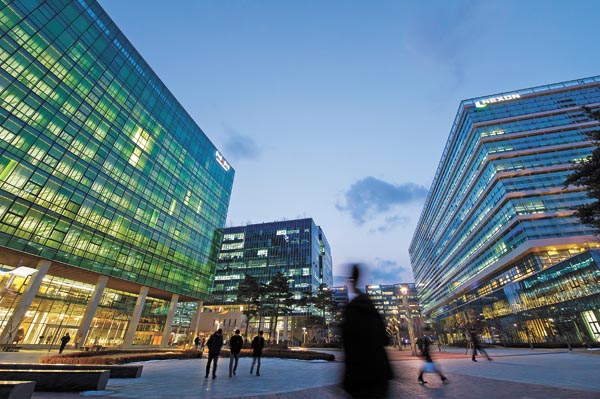 Night falls on the Pangyo Techno Valley in Gyeonggi. There are roughly 1,000 start-ups ranging from bio companies to game developers hoping to be the next big thing. [OH SANG-MIN]

A start-up based in the Pangyo Techno Valley almost had to close up shop after most of its key employees were recruited by a bigger company.

“We had to spend a huge amount of time and effort trying to recruit new employees with master’s or doctoral degrees that could replace those who left us,” said the company’s CEO, who requested anonymity. “We even had to meet and convince the people around the candidates.”

Pangyo Techno Valley, located in Pangyo, Gyeonggi, has undoubtedly become the leading Korean technology cluster. Many top bio, game and IT companies - including Korea’s biggest mobile messenger operator Kakao - have relocated their headquarters to the area since it opened in 2009.

According to the Gyeonggi Institute of Science and Technology Promotion, more than 1,000 companies and over 1,000 start-ups call the 661,000-square-meter (163-acre) cluster home. Seventy-six percent of the people working there are in their 20s and 30s. Last year, companies in the Pangyo Techno Valley generated combined revenue of 75 trillion won ($61 billion). 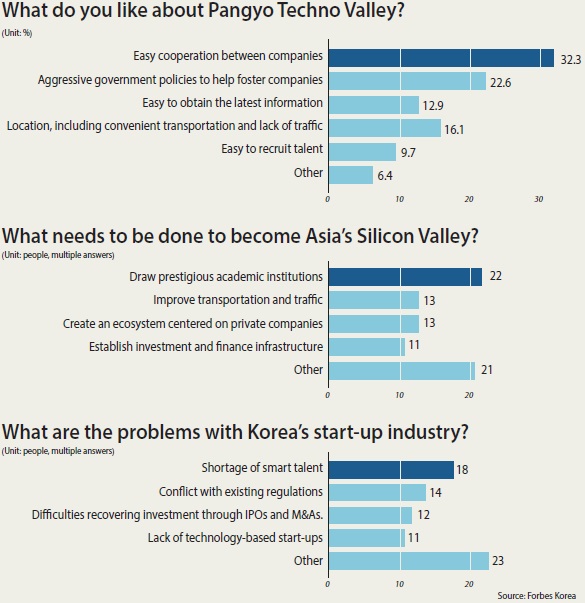 The JoongAng Ilbo’s business magazine, Forbes Korea, recently surveyed 31 CEOs of technology, IT and bio companies, as well as the heads of research centers and brokerage firms, located in the Pangyo Techno Valley on the present challenges faced by, and the future of, Korea’s start-up industry.

The survey showed that the biggest concern of IT companies today was a shortage of talented employees. In fact, 58.1 percent of the CEOs chose finding and keeping talented employees as their biggest concern. The second-biggest concern was conflict with existing regulations (45.2 percent), followed by problems getting investment through IPOs and M&As (38.7 percent). Another major problem reported was the lack of Korean start-ups with leading technologies.

When asked about the biggest factor in choosing a location to start a company, 38.7 percent said they wanted a place with an abundance of skilled workers. Only 9.7 percent said the Pangyo Techno Valley was such a place.

“When the start-up bubble burst in the early 2000s, many talented people started to avoid searching for jobs at start-ups,” said Hwangbo Yoon, chairman of the Korean Society of Business Venturing. “Another problem is that conglomerates, instead of investing in start-ups or seeking M&As with such companies, have decided to only poach their talent.”

In order to address the issue, Lee Min-hwa, director of the Korea Creative Economy Research Network, said start-ups have to offer more incentives so that employees will feel as though they have a hand in shaping and molding the company.

The CEOs surveyed said if the Korean start-up industry is to leap forward, it needs to create an ecosystem where start-ups lead to growth, reinvestment and ultimately help for other people who want to start their own businesses.

“Seeing start-ups that have grown into successful major entities go on to personally incubate other smaller start-ups here in Pangyo is inspiring,” said Kim Ki-seok, CEO of Doabler Platform, a crowd-funding company.

Doabler Platform is receiving support such as office space, consulting on legal issues and help with marketing from game developer Neowiz, which runs its own start-up incubator.

Nexon, the country’s biggest game developer, is also running its own incubation program. Dubbed the Nexon & Partners Center, it provides similar support to 18 start-ups, including StormGames and Wolfship Games.

One fixture in Pangyo is Nam Min-woo, CEO of Dasan Networks, who is also head of the Korea Entrepreneurship Foundation. Nam runs an incubation center on the sixth floor of his company’s office in the cluster and often visits other younger entrepreneurs to give tips on running a start-up.

“Trying to hold a meeting or two in other start-up clusters like the Teheran Valley in Yeoksam-dong [southern Seoul] or the Guro Digital Valley in Guro [southwestern Seoul] is very difficult,” said another start-up CEO who requested anonymity. “But here, one-stop meetings between companies are easily arranged.”

Seventy-one percent of the CEOs surveyed said establishing academic institutes to draw or produce exceptional talent is one of the keys to turning Pangyo into Asia’s own Silicon Valley.

“If we could only attract leading universities or research centers with exceptional R&D capabilities, we will be able to draw talented people or even produce them,” said a bio company CEO who requested anonymity.

“Because of the uniqueness of our work, many of our employees work really late, and as a result, many of them drive to work,” said the CEO of a midsize start-up. “Because traffic congestion around Pangyo is really bad, many complain about the lack of parking spaces.”