Iofit collects data from ground up

Iofit collects data from ground up 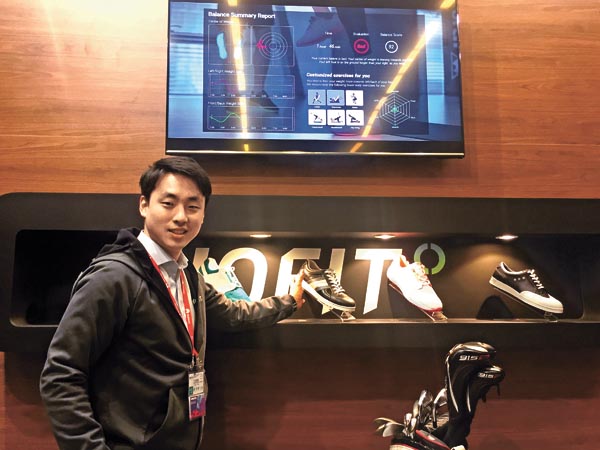 Cho Hyung-jin, CEO of Salted Venture, poses with Iofit-enabled shoes at the company booth during the 2016 Mobile World Congress in Barcelona, Spain, on Feb. 29. [SEO JI-EUN]

BARCELONA, Spain - When you do squats at the gym, your trainer gives you verbal feedback to correct your movements. But if you’re working out at home or on the road, it can be tough to make sure you’re exercising with perfect form.

Salted Venture, a Korean start-up, unveiled a solution at the 2016 Mobile World Congress, which was held here from Feb. 22-25. The technology is called Iofit, and it collects balance data in real time through 10 sensors inserted into a specially designed shoe insole. Fitness instructors, golf trainers and sports coaches can refer to the data on pressure and acceleration using an app on both Android and iOS devices. This will allow them to give more scientific advice to their clients - even if they’re half a world away.

“Balance is the most crucial part of fitness and a golf swing,” said Cho Hyung-jin, co-founder and CEO of Salted Venture, in an interview at his booth last Monday. “You simply need the insole and a smartphone to be coached while working out, regardless of where you are.”

The app includes a video function so that people can tape their workouts and send them to their trainer to receive visual feedback along with the data. The coach can mark the video where a wrong move was detected using the app’s drawing function.

Since both the sensors and circuits necessary are contained in the insole, users will not need to wear a separate device. The battery, also included in the insole, automatically sleeps when the shoe is not being worn, he explained. Charging is done wirelessly through a provided pad.

Iofit’s insole can be used in any shoe. Companies like Nike offer similar products that can measure the pace of a run or distance traveled, but none can measure balance or center of gravity, Cho said, adding that the technology was developed from the start with feedback from coaches and trainers.

Iofit’s booth, located in the hall reserved for fledgling start-ups, drew a crowd by allowing visitors to put on shoes with the special insoles, swing a golf club and get feedback on their swing.

Applications of the technology are wide-ranging, the CEO explained. “Weight lifters may find Iofit very useful because balance is a quintessential part of the sport.”

Iofit is the six-month-old start-up’s first product. The name is a portmanteau of “Internet” and “fitness,” as in Internet of Things. The company, one of dozens of Korean companies that participated in Europe’s biggest mobile event, was hatched as part of an internal project called C-Lab at Samsung Electronics.

The tech giant launched C-Lab, short for “creative lab,” in 2012 to incubate start-ups created by its own employees, thereby fostering a creative corporate culture and giving entrepreneurs an easier way to commercialize their technology. Some 100 projects have been led by the C-Lab over the past three years, and Samsung has picked three key projects to throw its weight behind.

Samsung offered the employees involved in the projects financial support while letting them run as independent businesses, and promised the employees they could return to Samsung should their business fail.

Cho majored in electronic engineering at Kyung Hee University in Seoul before joining Samsung in its semiconductor sector. He launched Iofit in his fourth year at the company with six other colleagues from different departments. Salted Venture went independent last August with funding from Samsung. It received a similar amount of financial support from Samsung as is normally given by other incubators or angel investors.