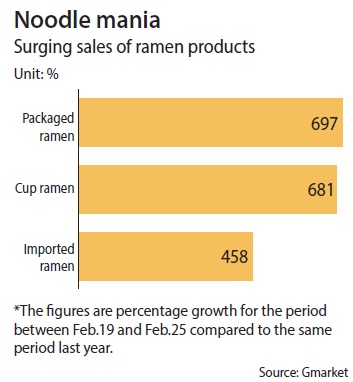 People are stockpiling ramen over fears that the price of instant noodle products will increase in coming months.

Sales of packaged ramen increased by a whopping 697 percent between Feb. 19 and Feb. 25 over a year ago, while those of cup noodles jumped 681 percent in the same period, according to e-commerce giant Gmarket on Monday.

Compared with the previous week, sales of packaged ramen rose 44 percent during the same period. Ramen imported from Japan, Vietnam and Indonesia posted 458 percent sales growth between Feb. 19 and Feb. 25 year on year.

“Ramen stayed at the same price for years, but now there are rumors of increases,” said Hong Sang-hoon, head of the processed food division at Gmarket. “People are buying the items in bulk through online orders.

“The popularity of variants such as jjajangmyeon (noodles with black bean sauce) and jjambbong (spicy noodle soup with seafood) contributed to the sales increase,” Hong added.

Nongshim, the country’s largest ramen producer, maintained prices of its signature products since 2011. For instance, the price of a pack of Shin Ramyun has been 780 won ($0.63) since November 2011.

Rivals Ottogi and Samyang Food have also refrained from raising prices since 2011.

Given that the price increases normally every four years, analysts have indicated the possibility of imminent price raises.

A recent series of price increases on staples like eggs and tofu have further bolstered the rumors about ramen. Food producers including Pulmuone blame the increases on a combination of higher costs for ingredients as well as employee wage increases.

A low won-dollar exchange rate has also pushed up the cost of imported ramen ingredients such as flour.

E-commerce leader Auction said that sales of ramen rose by 116 percent between Feb. 19 and Feb. 25 compared to the same period last year.

The mobile-oriented e-commerce player noted that men account for 40 percent of buyers of the noodle products, though they only account for around 20 percent of all transactions.