Start-ups with gov’t backing go to MWC in Barcelona

Start-ups with gov’t backing go to MWC in Barcelona 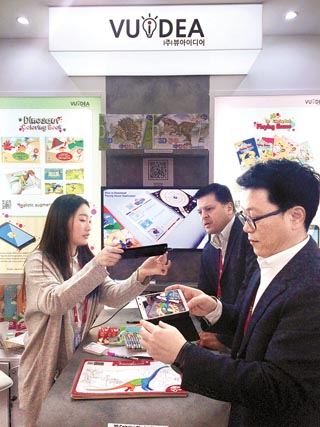 Kim Ha-dong, CEO of VUiDEA, far right, demonstrates the company’s app, which converts a two-dimensional sketch into a three-dimensional character on a smartphone, on Feb. 22 at the Mobile World Congress in Barcelona, Spain. [KIM KYUNG-MI]

Dozens of Korean start-ups showed off their technological prowess at the 2016 Mobile World Congress (MWC) held in Barcelona, Spain from Feb. 22-25.

Start-ups supported by the Ministry of Science, ICT and Future Planning and the Korea Trade-Investment Promotion Agency (Kotra), as well as a few backed by conglomerates such as Samsung, KT and SK Telecom, had booths presenting their latest apps and gadgets.

At the Smart Content Korea booth operated by the Science Ministry and the National IT Industry Promotion Agency (NIPA), eight start-ups showcased items.

An app developed by VUiDEA, a smart learning service start-up, utilizes augmented reality and virtual reality technology to transform a two-dimensional picture into three dimensions. It is trying to use the “pop-up technology” for educational services.

Kim Ha-dong, CEO of VUiDEA, used a smartphone to take a photo of a sketch of a tyrannosaurus colored pink and green. In a few seconds, the creature was brought to life as a three-dimensional character, moving around as if in an animated movie.

“We were able to take part in the congress through financial support and operational aid from NIPA,” Kim said. “We had numerous consulting sessions and earned positive feedback from buyers in 20 different countries, including the United States and United Kingdom, during the congress.”

Turnble, a multi-angle camera with which users can capture a 360-degree view of themselves, and a home security robot called AppBot that operates on Wi-Fi and closed-circuit television also caught the attention of passersby at the Barcelona fair.

SK Telecom selected start-ups from its affiliated companies and participants in its start-up nurturing program “Bravo! Restart,” which is operated with the Daejeon Center for Creative Economy & Innovation.

A smart watch developed by DOT, which converts text into Braille for the blind, and a virtual reality gadget designed to help severely disabled people communicate were among the products showcased in Barcelona.

Start-ups backed by KT were chosen through “K-Champ,” a rookie nurturing program operated by KT in cooperation with the Gyeonggi Center for Creative Economy & Innovation.

Volt, a self-defense app that sends an alert to the police 1.5 seconds after a user’s fingerprint is verified, was one of the products supported by KT. Its creators had a consulting session for the European market at the MWC.

A smart digital door-locking system by Amadas and an Internet of Things platform designed for small and midsize manufacturing companies developed by ulalaLAB also attracted attention.