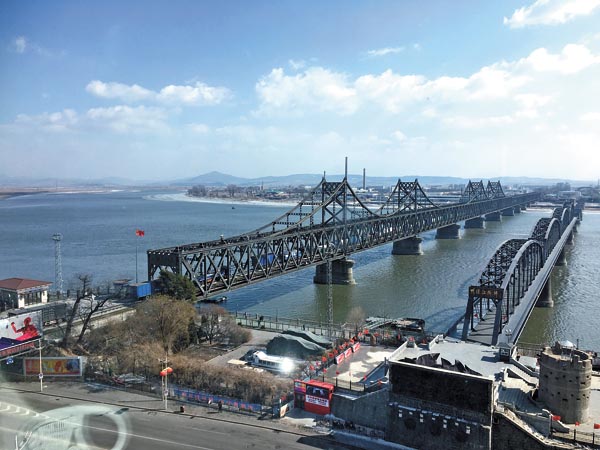 Chinese trucks carrying steel, pipes and tractors travel across the Yalu River over the Friendship Bridge to North Korea from Dandong, China, on Monday. The trucks came back empty late Monday. The trade business between the two allies has been normal ahead of the UN vote on a resolution against North Korea, sources said. [SHIN KYUNG-JIN]

DANDONG, China - Ahead of the United Nations Security Council’s vote to expand sanctions against North Korea, a bridge between the Chinese city of Dandong and the North Korean city of Sinuiju was packed with trucks carrying goods for trade.

North Korean and Chinese traders said Monday that they had yet to see a negative impact on their business after the UN announced a set of sanctions to ban exports of mineral resources and require mandatory inspections of all cargo entering and leaving the North.

But they traded products necessary for people’s “livelihoods,” they added.

“This is not the first time we have received sanctions,” a North Korean truck driver said at a logistics center in Dandong. “We are fine.”

On Monday, about 150 North Korean trucks traveled across the Yalu River over the Friendship Bridge from North Korea to Dandong, China’s largest border city with the North, while around 100 Chinese trucks carrying steel, pipes, tractors and petroleum coke entered North Korea.

“There is no significant change in trading between the North and China because the UN resolution has not been adopted,” a source knowledgeable of the matter said. “If the resolution is adopted, the cargo inspection will get stricter within a week.”

However, the source added that small and midsize traders in Dandong would not see a significant impact due to an exceptional clause in the resolution that would enable trade between the two allies so long as it is for “humanitarian purposes.”

Yet while traders in the border cities between China and North Korea expect they will not be subject to what is said to be the strongest sanctions package against Pyongyang to date - punishment for its fourth nuclear test in January and subsequent long-range missile launch - North Korean restaurants have already experienced a sharp decline in visitors.

South Korea earlier urged its citizens to refrain from visiting restaurants overseas that are run by North Korea as part of efforts cut the routes of hard currency flowing to the regime.

At lunch time on Monday, most of the tables at a North Korean restaurant in Dandong - once packed with Korean tourists, Korean immigrants and the Chinese - remained emptied. Only three tables out of 30 were occupied by customers.

The people living in Dandong explained that the number of Chinese visitors to North Korea’s restaurants had dramatically decreased recently due to poor service and high prices, but that it was also a direct result of South Korea’s advisory.

North Korea reportedly brought in a maximum of $100 million annually from its overseas restaurant business, which is tantamount to the money South Korea paid to North Korea last year through the Kaesong Industrial Complex, the only remaining inter-Korean cooperation project that was shut down Feb. 10.