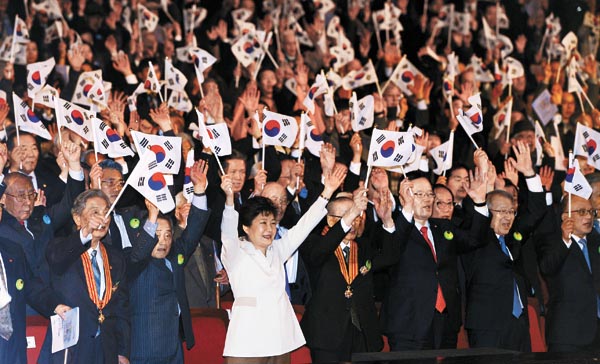 President Park Geun-hye, center, cheers with a national flag during a ceremony to mark the anniversary of the March 1, 1919, independence movement against Japanese colonial rule over the Korean Peninsula at the Sejong Center for the Performing Arts in central Seoul on Tuesday. [JOINT PRESS CORPS]

“Based on unyielding readiness and international cooperation, the government will make sure North Korea will have no choice but to give up its nuclear program,” Park said in an address commemorating the 97th anniversary of Korea’s independence movement against Japanese colonial rule, which was celebrated Tuesday. “Now, it is time for North Korea to make a choice.

“It has become clear that the existing countermeasures won’t stop the North’s determination for nuclear development,” Park said. “We must show the North clearly that exploiting its people and concentrating everything on nuclear development for the regime’s survival will never succeed. We will show them it is meaningless.”

She reminded the North that the international community will soon impose stronger-than-ever sanctions through a United Nations resolution. Peaceful unification of the two Koreas was also stressed as a way to end tensions on the peninsula.

Park said Seoul will keep the door open for talks on denuclearization, but pressure by the South and the international community will continue if Pyongyang refuses to give up its nuclear program. Since the North’s fourth nuclear test in January, it was the first time Park mentioned the possibility of dialogue.

Park’s message to Pyongyang was strong but toned down from a Feb. 16 speech at the National Assembly in which she warned the Kim Jong-un regime that it would only speed along its “collapse” by maintaining its nuclear ambitions. That speech was seen as a departure from her previous policy of so-called trust-building on the peninsula.

Park also issued a conspicuously brief and reserved message to Japan after Korea and Japan struck a deal to settle the issue of the Japanese military’s forced recruitment of Korean women into sexual slavery during colonial times and World War II.

“The Japanese government must not forget its past misdeeds, respect the spirit of the agreement and fully implement it so that our future generations will learn from it,” she said. She added that a new chapter in Korea-Japan relations could be opened when Japan faces history squarely.

Since she took office in 2013, Park has used the March 1 speeches to urge Tokyo to resolve the so-called comfort women issue. This year, she only spent five sentences telling Japan to follow through on the agreement.

Japan agreed to offer a government apology and a multimillion-dollar fund for the victims in a landmark deal in December. While the Korean public complained that the agreement was unsatisfactory, Japan denied later the forced nature of sexual slavery, fueling dissatisfaction.

The main opposition Minjoo Party of Korea criticized Tuesday Park’s approach to both Pyongyang and Tokyo.

“A realistic and effective policy based on a rational assessment of the situation is as important as the president’s determination to resolve the nuclear crisis,” Minjoo Party spokesman Kim Sung-soo said. “Above all, she must seriously consider the impact that strained inter-Korean relations have on national security and the economy to make sure there will be no burden on the country and the people.”

Kim said Park was making an empty request to Japan to remember its wartime past and fully implement the agreed settlement on the comfort women issue.