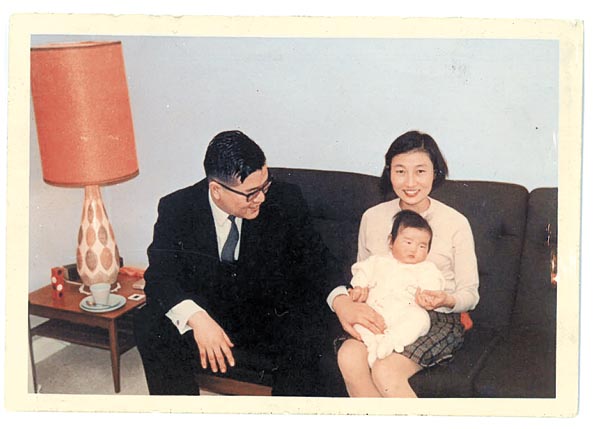 Park No-soo, left, smiles at his daughter Park Young-sook, sitting on her mother’s lap, at their home in London in 1968, when he worked at the University of Cambridge as an international law professor. [PARK YOUNG-SOOK]

For almost 50 years, Park Young-sook went through life known as the daughter of a North Korean spy.

Her father was executed in 1972, found guilty of espionage charges, and for years she remained haunted by that legacy.

But in December, after waiting nearly half a century, she was finally freed from that burden when her father, Park No-soo, was posthumously acquitted by the Supreme Court in a retrial.

Born in 1933, he had worked as an international law professor at the University of Cambridge. But when he returned to South Korea in 1969 for a job with his wife and daughter, who at the time was barely a year old, he was arrested by the country’s intelligence agency on suspicions that he violated the National Security Law, enacted in 1948 to fight Communism.

He underwent intense interrogations and later indicted on charges that he had attempted to infiltrate the Blue House upon the orders of North Korean intelligence agents he was said to have conspired with in Berlin during his tenure at Cambridge.

The Supreme Court finalized Park’s sentence in 1970, and two years later he was executed despite the fact that the case was under review for a retrial.

“I hated when people would tell me that I had Communist blood,” Park, now 48, recalled of her childhood. “So I tried hard to be seen as a good student.”

But her reputation as the daughter of a North Korean spy deprived her of many opportunities, specifically the possibility of landing a decent corporate or government job, and potential employers threw out her application after screening her family records.

Her mother was pardoned after serving 18 months in prison, but the aftereffects of her torture during interrogation were too much for her to bear, and she ended up leaving the young Park to fend for herself.

“I can say I have stood firm throughout my life,” Park said. “In my heart, I know my father’s great achievements.”

She has an image of her father as a “great scholar,” she said, based on the stories she’s heard from relatives. “But the more I think about him, the more I feel regretful.”

Despite a talent for foreign languages, Park instead chose to major in chemistry in college after being encouraged by her grandparents to study a subject that lacked a “political ideology.”

She has worked as a chemistry teacher at a local high school for 10 years but admitted that she often felt “restricted” by the Korean government even in daily life.

When the Truth and Reconciliation Commission, a governmental body established in 2005 to investigate and unveil crimes by past governments or state actors, released a report on her father’s case in 2006, things slowly began to change.

The report, written based on the testimonies of more than 30 people, showed that Park No-soo had suffered through extreme torture during interrogation.

A man cited in the report who aided in the investigation against Park, admitted that the director of the Korean Central Intelligence Agency at the time had threatened to kill the former Cambridge professor if he didn’t “say the right thing,” all the while pointing a gun at Park’s head.

The surviving Park applied for a retrial, the first hearing of which was held in 2013.

“Park No-soo was coerced into signing a false confession after he was illegally arrested and imprisoned. That cannot be accepted as evidence,” said Jo Eui-jeong, a defense lawyer on the case. “He had no choice but to make false statements under severe torture.”

On Dec. 23, 2015, the Supreme Court declared Park No-soo not guilty - a verdict that came nearly 43 years after his death.

But rather than feeling elated, Park Young-sook said in a recent interview that, instead, she felt “numb.”

In late January, she filed a civil suit against the government demanding compensation for the wrongs committed against her father. Her biggest hope now, she said, is to receive an official apology from the South Korean government.

Her other is to bring back some of the records her father donated to Cambridge in his capacity as an international law professor. There are currently 4,000 of Park’s academic records preserved at the university, though the school is not authorized to release its trove to the Park family.

“It would comfort the sorrow of losing my father if I could at least get a list of the documents my father left in this world,” she said.