Choi eager to prove his value to the Los Angeles Angels

Choi eager to prove his value to the Los Angeles Angels 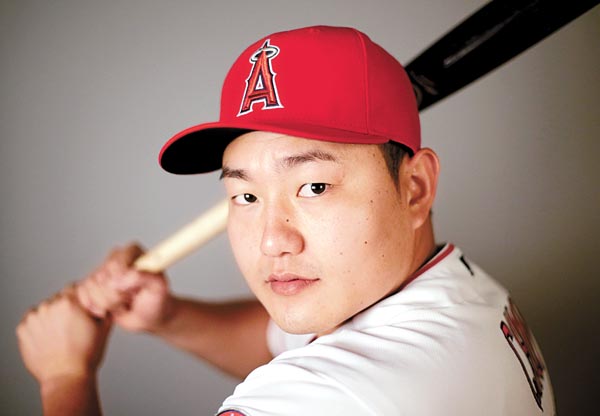 TEMPE, Ariz. - Choi Ji-Man’s baseball career had stalled a bit last summer in his sixth pro season. The South Korean prospect says he decided to get it moving again by learning how to switch-hit in the middle of the year.

The 24-year-old Choi is taking a shot at a major league roster spot this spring with the Angels, who chose him in the Rule 5 draft last winter. He spent five seasons in the Seattle Mariners’ system before Baltimore signed him last November and quickly lost him to Los Angeles, where he could turn out to be a piece of the solution to the Angels’ unsettled situation in left field.

Choi is doing it with less than a year of experience as a right-handed batter. He always threw right-handed, but had always batted left-handed until he decided to try the other side of the plate in batting practice.

“First pitch, line drive,” he said with a grin.

Howard Johnson, Choi’s hitting coach with Triple-A Tacoma last year, supported Choi’s plan to hit from both sides. Choi kicks his leg much more prominently when hitting from the right side, describing his two swings as “totally different.”

“I don’t worry about the form,” Choi said through a translator. “Just concentrate on hitting the ball. See the ball, hit the ball.”

Choi subsequently went 6 for 14 from the right side last season. Scioscia is impressed by Choi’s initiative and acumen as a switch-hitter, but doesn’t think it’s revolutionary.

“Eddie Murray didn’t start switch-hitting until late in his minor league career, and he’s in the Hall of Fame,” Scioscia said. “And that was when he switched to left-handed, which he hit most of the time. There are guys who picked it up a little later and have been really proficient. [Choi] has really good hand-eye coordination. He has a chance.”

Choi is eager for the chance after playing in just 97 games over the past two seasons in Seattle’s system due to a broken fibula and a 50-game suspension for a positive doping test.

Choi mostly plays first base, where he is an exceptional fielder, but also can play the outfield. He is a good fit for the Angels, who potentially need help at both spots.

Albert Pujols is returning deliberately from offseason surgery, and the three-time NL MVP might not be ready for opening day. Left field is wide open, with several veterans vying for playing time and a platoon role. Choi could fill a role on the Angels’ bench similar to the job held last season by Efren Navarro, who also played first and left.

“He’s an interesting kid,” Scioscia said of Choi. “He’s shown really good mobility at first base. He has nice hands, and on the offensive side, has a great approach at the plate. He’ll drive the ball, has great alley power, nice idea of what he’s doing in the box. He’s shown very well early.”

The Angels can afford to try just about anything in left field, where the players who filled Josh Hamilton’s not-so-intimidating shoes last year had a cumulatively terrible season. After the stormy departure of Hamilton, who will make $24 million from the Angels to play for AL West rival Texas this year, the Angels’ remaining left fielders combined last season for a .317 slugging percentage - lowest in the majors.

Newcomers Craig Gentry, Daniel Nava, Todd Cunningham, Rafael Ortega and Choi would all love to claim left field. All five candidates are eager for a fresh start, but they also weren’t among the winter’s marquee free-agent outfielders.

The 32-year-old Gentry ended last season in Triple-A after batting .120 for Oakland.

“When you go through struggle, you can easily let it affect and just let it snowball,” said Gentry, who also spent five seasons with Texas. “This game, it will humble you real quick. You just learn how to let it go. This is a great change of scenery. I’ve admired this team for a while from afar, loved how they play the game.” AP