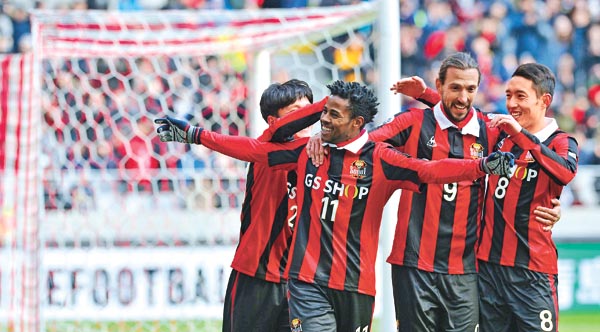 FC Seoul striker Carlos Adriano celebrates with his teammates after scoring his second goal in the Asian Champions League (ACL) game against Sanfrecce Hiroshima of Japan on Tuesday. Adriano has scored seven goals in the past two ACL matches. [NEWSIS]

FC Seoul players didn’t need the added motivation of the national holiday in their match against Sanfrecce Hiroshima of Japan on Tuesday, March 1. They crushed Hiroshima 4-1 in the Asian Football Confederation Champions League (ACL) in Seoul.

Tuesday was the Korean national holiday to commemorate the March 1st Movement that occurred in 1919 to resist the Japanese occupation of Korea. For South Koreans, this is the day to recollect the painful past under the colonial rule of Japan and be reminded of the strenuous effort by their ancestors to liberate the country.

“We will do our best to acquire the best result on this day,” said Choi Yong-soo, the FC Seoul manager said before the game. “We will show our preparedness and determination to the fans at home.”

Putting aside the athletic determination, the pressure multiplies for the South Korean team to play a Japanese club on this day. If they were to lose, the disappointment by the local fans would be unbearable.

The match was more unpredictable for Seoul since Hiroshima is a powerhouse and defending champions in the J-League. In addition to the historical background, Seoul had another motive to defeat Hiroshima, to avenge its 2-1 loss and 2-2 draw in the 2014 ACL group stage.

In the end, it was the determination of the players mixed with manager Choi’s experience in the J-League as a player and detailed analysis of the opposition that paved the way for Seoul to defeat the Japanese club.

Initially, Seoul allowed Hiroshima to take the lead when Kazuhiko Chiba scored the opening goal in the 25th minute. Although Seoul scored an equalizer six minutes after Hiroshima’s goal, the match was tight. However, Seoul began to control the tempo of the game in the second half as Brazilian striker Carlos Adriano came alive. Scoring the tie-breaker 58 minutes into the match, Adriano scored back-to-back goals in the 62nd and 69th minute to record a hat-trick, putting the game out of the reach of Hiroshima. This was his second hat-trick in the ACL after his previous one against Buriram United of Thailand on Feb. 23 when Adriano scored four goals in the 6-0 match. Piling in seven goals in two games, Adriano leads the ACL in scoring.

After the match, Adriano expressed his excitement. “I am very pleased about my goals. Every single one of them is significant. I did not do this by myself though. The victory belongs to the team, not to an individual player. I was able to train with the team from the start this season, in comparison to last season when I joined the team in the middle of the season. I think that allowed me to improve my teamwork.”

When asked what it means for Seoul to defeat Hiroshima on Mar. 1, Adriano expressed his awareness about the significance behind the match. “I knew what my South Korean teammates had in their mind during the game today.” said Adriano. “I wanted to be a part of it. When my Korean teammates are happy, so am I. As their teammate, their determination and burden are something that I need to share.”